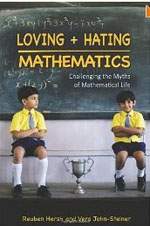 Loving and hating mathematics: Challenging the myths of mathematical life

By Reuben Hersh and Vera John-Steiner

Loving and hating mathematics is an intriguing title, but it doesn't tell you what this book is about. More informative is the subtitle: Challenging the myths of mathematical life. The book is a collaboration between a mathematician, Reuben Hersh, and a psychologist in the fields of linguistics and education, Vera John-Steiner.

To those interested in mathematics, Hersh is probably best known as a co-author (with Philip Davis) of The mathematical experience, that wonderful analysis of the way modern mathematics is done, from a philosophical and historical perspective. For me, that is one of the few books that manages to get across what it is like to do mathematics. Does Loving and hating mathematics achieve something similar?

In my view, not quite, but there's plenty of interest in the book nevertheless.

Hersh and John-Steiner are pretty explicit about which particular myths of mathematical life they are going to challenge, and indeed they structure the book around four of them. The first is that "mathematicians are different from other people, lacking emotional complexity." This is dealt with in the first four chapters: on how children begin to become mathematicians, on the culture of the mathematical community, on mathematics as a "safe hiding place" from the vicissitudes of the world such as oppression and imprisonment, and on the (potentially) addictive nature of mathematics.

For me, this myth is challenged less successfully than those in later parts of the book, and that has to do both with the nature of the myth itself and with the overall style of the book. One can't plausibly deny that mathematicians are seen as being different, but it is less clear that a lack of emotional complexity is a key part of this perceived difference. Stereotypes of nerdy mathematicians addressing one another's feet do abound, but I'm not sure to what extent this would be seen as a sign of lack of emotional complexity as opposed to a non-standard way of dealing with emotions. The style of the book is largely to present anecdotes and case studies of individuals involved in mathematics, and these stories, because they are well-written and often compelling, tend to dominate and hence to draw attention away from the big picture that they are intended to paint.

The next two myths are handled more convincingly. The idea that "mathematics is a solitary pursuit" is taken apart in chapters 5 and 6, which deal with mathematical friendships and partnerships, and with mathematical communities. Friendships and partnerships of many kinds are described, often with fascinating details: mentor and learner (Weierstrass and Kovalevskaya), long-term collaborating friends (Hardy and Littlewood), mathematical marriages (Grace Chisholm and William Young, Julia and Raphael Robinson), and many others. It is perhaps a symptom of the inward-looking (into mathematics) approach of the book that this chapter starts by asking, "Do mathematicians have friends?", and then answering very affirmatively about friends in mathematics. Anyone wondering whether mathematicians have non-mathematical friends would need to look elsewhere.

The chapter on mathematical communities was, for me, one of the most interesting, with case studies ranging from Göttingen in the early 20th century to the Jewish People's University in Moscow from 1978 to 1983, and the Association for Women in Mathematics. This illustrates very broadly the diversity of ways in which mathematicians can interact.

The myth that "mathematics is a young man's game", to quote G.H. Hardy, is largely taken apart in chapter 7, though some of it is left standing. We learn, through reading about Sophie Germain, Sofia Kovlevskaya, Emmy Noether, and several contemporary women mathematicians, that the relative lack of women mathematicians in the past stemmed from the position of women in the societies of the time, and that while some things have changed, other have not. The authors state that "Having children is almost bound to disrupt a mother's professional activities" — seemingly fathers do not have this problem — and that the myth of young, energetic mathematicians contributes to the pressure, particularly for women. Women can do mathematics just as well as men, but societal attitudes, some of them specific to the mathematical community, are still getting in the way. On age, the book reports a survey of 250 older mathematicians known to one of the authors (Hersh). Much detail is given on their replies on mathematical activity at older ages. The main picture that emerges is one of diversity; some are less productive, some not, some have met barriers due to age, some not. In any case, the sample was not in any sense representative (and only 66 responses were obtained); in a sense, all we learn is that Hardy was not 100% accurate.

The final myth is that "mathematics is an effective filter for higher education". This is covered in two chapters, which concentrate largely on the education system in the USA. Chapter 8 contrasts two approaches to college-level mathematics education, one (the Moore method) very elitist, and the other (the Potsdam model) universalist. One learns a lot about these approaches and their roots, but much of the detail is not directly relevant to systems of higher education elsewhere. The final chapter is largely on school mathematics, and here several overall messages do filter successfully through the background of the US system. School students (and others) are polarised on mathematics — they love it or hate it. Those that hate it seem to learn to hate it at school. Reform is necessary, in particular to connect learning to real life experiences, and many different approaches to mathematics reform are described. The authors conclude that one key issue is the use of mathematics proficiency, as measured by a limited set of tests fitting within an insufficiently humanistic curriculum, as a filter for entry to further academic study, whether or not that study actually requires knowledge of the kind of mathematics that was learned or tested.

This is a complex book, which does not entirely achieve what it set out to do, and which does not entirely hang together as an organised whole. Sometimes the richness of the anecdotes and case studies gets in the way of the overall messages. The stories are not going to convince someone to continue their mathematical studies if they are worried about becoming different from their non-mathematical friends. But it is worth reading for the admirable way that the stories and anecdotes humanise mathematics — and because many of the anecdotes are very good stories in their own right.

Kevin McConway is Professor of Applied Statistics at the Open University. As well as teaching and research in the statistics of ecology and evolution and in subjective probability, he works in promoting the public understanding of statistics and probability.