The Magic Cube: Get puzzling! 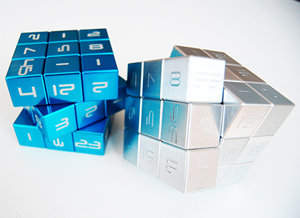 If you like the Rubik's cube then you might love the Magic Cube. Rather than having colours on the little square faces it has number on it. So your task is not only to put the large faces together in the right way, but also to figure out what this right way is. Which numbers should occur together on the same face and in what order? Jonathan Kinlay, the inventor of the Magic Cube, has estimated that there are 140 x 1021 different configurations of the Magic Cube. That's 140 followed by 21 zeroes and 3000 more configurations than on an ordinary Rubik's cube.

To celebrate the launch of the Magic Cube, Kinlay's company Innovation Factory is running a competition to see who can solve the cube first. To start it off they will be shipping a version the puzzle directly to 100 of the world's leading quantitative experts, a list that includes people at MIT, Microsoft and Goldman Sachs.

You can join too by nominating yourself (or someone else). Innovation Factory will accept up to 20 nominees (in addition to those that have already been picked). The competition will launch in September and run for 60 days. To nominate someone please send an email to MagicCubeCompetition@IF-Chicago.com, giving the name and email, mailing address of the nominee and a brief explanation of why you think they should be included in the competition. If you don't get accepted, don't worry — the Magic Cube will go on sale after the competition has ended.

The winner will receive lots of glory and a metal version of the Magic Cube precision-machined from solid aluminium, and they will be featured on the Innovation Factory website.

As a warm-up you can read about the ordinary Rubik's cube on Plus.