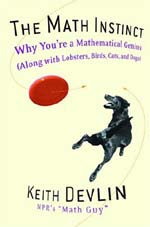 The math instinct: Why you're a mathematical genius (along with lobsters, birds, cats, and dogs)

Keith Devlin is a well-known populariser of mathematics, author of many books and appearing regularly on American radio as "The Math Guy" In this latest offering he walks us through the astounding mathematical capabilities of both plants and animals, and on to the abstract abilities of humans.

As you might expect if you already have an interest in this subject, Devlin mentions many of the classic examples of maths found in nature. He describes the Fibonacci swirl of sunflower seeds or leaves on a stem, the patterning of leopard spots, the hexagonal lattice of honeycomb, dogs that calculate the quickest route to a stick thrown into the sea (taking into account that running along sand is much faster than swimming) and "Clever Hans", the horse that was thought to be able to do sums.

All of these have already been well covered in numerous other popular accounts, and this book is frustratingly thin on the maths behind these examples. But Devlin does give a satisfying explanation of the reasons for the spiral of a spider's web, a nautilus shell, and the hunting dive of a falcon.

Devlin goes into great detail on how animals find their way around and how humans are able to perceive the visible world. We learn about lobsters reading the Earth's magnetic field, bats seeing with echoes and birds that steer by the stars. Although fascinating, the direct relevance of these abilities to maths is not made clear, and the following chapter on the visual processing that our brains accomplish is lifted almost entirely, albeit with recognition, from another popular science book. Navigation and visual processing are of course feats of computation, and thus ultimately based on mathematics, but no more so than many other aspects of nature.

To be sure, Devlin is very clear in his distinction between "innate maths" and the conscious "symbolic maths" of which humans are uniquely capable. But he explains much less clearly why he has chosen these particular examples to support his argument, seeming rather to take an arbitrary stroll through a few cases he thought interesting at the time. A desert ant plotting its route back to the nest is no more "doing math" than a bumblebee is solving the fiendishly difficult fluid dynamics problem posed by keeping itself in flight. All of this is just hard-coded into the body and brain of the animal by evolution. It is like saying that a span bridge exploits mathematics so as not to collapse.

These few criticisms aside, The Math Instinct wholly redeems itself with the account of how the capability for symbolic maths seems to be built into the human brain. Babies first show signs of the ability to count from a very early age, and Brazilian street traders develop their own rules for mental arithmetic distinct from the formal systems they are taught in school. In fact, when given numerically identical calculations to perform in the context of a test they, along with most educated adults, perform abysmally. Devlin claims that this is because school maths is often not taught with the proper context - pupils just learn the rules rather than understand why they are so.

It turns out that linguistics is also crucial for our mathematical abilities. Devlin explains why the brain treats "3" in a completely different way to "three", and why people find times tables so hard to learn. He condenses these final factors down into four top tips on how to improve your own maths skills.

The Math Instinct is absolutely engrossing in places, and fluidly written throughout, but it does leave the reader with the distinct feeling that it has been hurriedly cobbled together.

Lewis Dartnell read Biological Sciences at Queen's College, Oxford. He is now on a four-year combined MRes-PhD program in Modelling Biological Complexity at University College London's Centre for multidisciplinary science, CoMPLEX. He completed the MRes last year, and is now just beginning a PhD in the field of astrobiology. He is using computer models of the magnetic fields on Mars to predict radiation levels, and whether alien life, or even future human explorers, could possibly be surviving near the surface.

In 2003 he came second in the THES/OUP science writing competition, and this year was awarded second prize in the Daily Telegraph/BASF Young Science Writer Awards. You can read more of Lewis's work at his homepage.