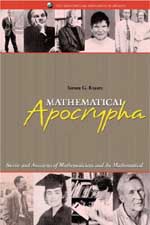 "Mathematical Apocrypha" is, as its subtitle intimates, a book of stories and anecdotes about mathematicians and the mathematical. However, in contrast with many books about mathematicians, Steven Krantz focuses on contemporary figures such as Wiener, Littlewood and Hardy, and says very little about the usual myths regarding Pythagoras, Descartes or Euler.

The structure of the book, divided in six main chapters, already tells us about the whimsical and personal style of the author. Great foolishness, great affrontery, great ideas, great failures, great pranks and great people are the titles of each of the chapters in which we can find short independent stories, sometimes no longer than two lines, about Einstein, Russell, Atiyah and many others.

Many of the anecdotes presented are derived from the author's direct or second-hand experience and, as he says in the preface, they "are in fact verifiable, and have been checked with other witnesses". However, the fact that a story is more likely to be true does not make it more interesting (otherwise we would always find fiction boring), and many of the stories can be seen as common accounts of the personal lives of characters who happen to be mathematicians. Nevertheless, "Mathematical Apocrypha" is, most of the time, an entertaining read.

The book is also a good way of learning a few new names from the mathematics community of recent years and keeping up to date. With each anecdote we learn a little bit about these mathematicians' lives, their students, the people they met, who they talked to, and their main contributions to mathematics. Throughout the book, the author manages to sketch a network of enthusiastic mathematicians and their acquaintances, which, even if biased by his personal experience, helps us to a better understanding of the world of mathematics and the people behind it.

This book will appeal mainly to mathematicians, people working in the world of mathematics and academics looking for the latest mathematical gossip. For readers who are not familiar with the characters, it might be hard to attach faces to the names and the stories might as a result seem rather colourless. However, if you have a taste for anecdote and are interested in those small facts that reveal so much about character, this book is for you. Bear in mind, though, that in order to understand the humour behind some of these stories it is necessary to have at least a minimum knowledge of mathematical culture.

The book's bottom line is that mathematicians are human beings - but of a very different kind. But are they really that eccentric, lunatic and absentminded? Sometimes the book is based on clichés and stereotypes, but then again a story never becomes an interesting anecdote if it doesn't account for unconventional episodes.

In case "Mathematical Apocrypha" doesn't completely satisfy your need for anecdotes and stories, Krantz presents a section full of references for further reading at the end of the book, including a few webpages such as the Anecdotes about Mathematicians and Logicians site.

Cristina Escoda is a second year Phd student at the University of Cambridge working on the phenomenology of String Theory and Supersymmetry. Cristina is an enthusiastic writer very intereted in science communication.
Tweets by plusmathsorg