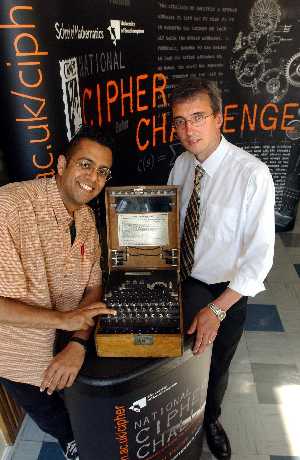 It's 1937 and the FBI have discovered an envelope of encrypted papers in the burning wreckage of the German airship Hindenberg. Unable to crack the code they call in mathematician and private investigator Harry Schultz Vandiver for help. As Harry begins to unravel the codes, the secret of a German weapons project is revealed and it appears the fire might not have been an accident...

No, this isn't the back-cover blurb from the latest fiction to hit the topseller lists - it's the opening scenario for the University of Southampton's National Cipher Challenge, offering us the chance to play a part in this online mathematical mystery.

On 30 September the first encrypted message will be posted online in Harry's journal, with more appearing over the coming months as he investigates the "Die Alchemisten" weapons project. Prizes are awarded for the fastest and most accurate decryptions of the messages, and the prizes grow as the investigation continues and the ciphers become increasingly harder to crack.

Past challenges have included a fictitious archaeologist hunting down the legendary "Babylonian Stone" in 1911, and famous 19th century scientists tracking down a missing cipher machine. Setting the challenges within a mystery and having the competitors helping the hero of the story with each message they crack has proved popular. Last year's Challenge inspired almost 3000 pupils from 520 schools to take part and even more are expected to enter this year. It has also meant that different types of mathematics can be highlighted through the competition, from Babylonian mathematics to war-time ciphers.

"By taking part, young code-breakers will learn how cryptography developed, and how it links in with related science and technology, as well as some cultural and political history," said organiser Graham Niblo. "I hope it will also help set maths in a real world context: cryptography is all around us - from internet security to encrypting mobile phone calls."

And although the competition is only open to UK students under the age of 18, anyone can try their hand at unravelling the messages and following the story online. So get your code-cracking wits ready, a mathematical mystery is about to begin...