'Maths for the mystified' 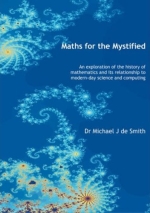 Maths for the mystified

This book starts with the story of Larry Walters, who decided to try flying a garden chair with some fifty helium weather balloons attached. Larry didn't do the maths, and ended up at 16,000 feet! Michael de Smith has written a book for all the Larrys who need or ought to do some mathematical analysis of a problem before setting out.

The book is divided into three sections. In the first, de Smith deals with the foundations of maths — such as why our number system has developed as it has, why we use so many strange symbols, why statistics are so important and so widely disbelieved, the role of measurement, and much more. The historical stories he gives humanise the maths, giving a context for how and why maths has developed as it has.

The second section helps people to explore maths using the computer as a laboratory. De Smith discusses the use of Excel, Maple, and MATLab as tools for investigating mathematical problems. The applications covered range from rediscovering multiplication and division, to digital image processing and modelling population growth.

In the third section he looks at interesting numbers and sequences. In the course of this, he looks at different ways of finding values for numbers like π, e (the base of the natural logarithm) and the golden ratio. This leads him into many fascinating mathematical byways, such as the Fibonacci series and the logarithmic spiral, continued fractions, and compound interest.

In his introduction Michael de Smith claims this book is for anyone interested in knowing a bit more about maths and using computer software as a tool for mathematical investigation. It would certainly be useful for anyone studying or working in a context where some mathematical literacy is useful, who feels that maths has so far passed them by or that they don't know enough of the whole story. You could just read it through, and then come back to specific topics according to how useful they are to you. Alternatively, you can dip into topics without having to read the rest.

I would definitely recommend this book to anyone studying maths at A level or teaching it at any level. I would also recommend it to anyone who is just interested in knowing more about maths.

Jenny Gage was a secondary maths teacher for 15 years before coming to the Millennium Mathematics Project (of which Plus is a part) as academic coordinator of the Motivate Project, which uses videoconferencing to enable school students of all ages in the UK and internationally to access enrichment maths and science conferences. In 2004 she completed her PhD on using graphic calculators as a tool to help students understand the concept of an algebraic variable. She has also conducted research into the use of videoconferencing as an educational tool.

If you are interested in setting up a Motivate videoconference at your school, then visit the Motivate website.