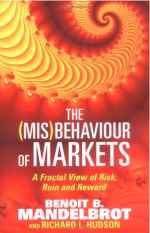 A fractal view of risk, ruin and reward

Throughout history, millions have been won and lost on the stock market: lost in the Wall Street Crash of 1929, won in the Dot-Com Boom of the 1990s. We all know that playing on the markets is a dicey game, but after decades of research we now have a better understanding of the way markets work. Or do we? According to Benoît Mandelbrot, modern financial theory is based on unrealistic assumptions that need a complete re-think.

This book chronicles Mandelbrot's forty-year quest to understand how the stock market works, and his search for a better mathematical model. Using the techniques of fractal geometry, which he himself invented, Mandelbrot believes he has finally realised his ambition. But getting his ideas to be taken seriously has proven even more difficult.

Mathematicians make models based on patterns, and the problem with the stock market is that there aren't any. In fact, trying to predict how much a share price will rise or fall may seem like trying to predict the weather — though that hasn't stopped people from trying.

The first big breakthrough was made by another Frenchman, Louis Bachelier, at the turn of the twentieth century, but his ideas were never given credit during his lifetime. After the Second World War, his work was rediscovered at a time when mathematical finance was gaining prominence as a field of study. Soon, a variety of tools were developed to help financiers: Market Portfolio Theory, the Capital Asset Pricing Model, and the Black-Scholes equation.

According to Mandelbrot, all this work is fundamentally flawed as it underestimates the wild behaviour of financial markets, which makes them so risky. So in his three-part book, Mandelbrot attacks the old way of looking at markets, introduces a new way, and then recommends the way ahead. And what's more, he does it with style.

The Polish-born mathematician has a wonderful way of writing that blends non-fiction with storytelling. Mandelbrot says that "an interest in the history of ideas is good for the scientist's soul" and the historic accounts are indeed a joy to read. The tale of Harold Edwin Hurst, for example, who analysed the flooding of the Nile, is one of the gems that are dotted throughout the book. The author also relates stories from his own colourful life, which adds to the character of the book.

The (Mis)Behaviour of Markets was clearly written with non-mathematicians in mind. Unlike some mathematicians, Mandelbrot doesn't depend on algebra and equations to make his point. He prefers pictures to proofs, and this makes the book accessible to a wider audience. From a mathematician's perspective, it seems a shame to relegate every equation to the notes at the back of the book, but the result is undoubtedly more readable.

In general, Mandelbrot's views are well-presented and entirely plausible: when he says something, you believe him. His reasons for rejecting popular ideas in financial theory seem sound, though you can't help thinking that he may be biased. But, his biggest problem is trying to explain the difficult areas of scaling, power laws and fractals, and how they can be applied to create a better model of the stock market. At times he does this brilliantly, but sometimes he falls short of the mark and less experience readers may struggle with the lack of clarity.

Mandelbrot's co-author, Richard Hudson, describes him as a maverick and it is easy to see why. But the fact that so many of Mandelbrot's theories about financial markets have now been accepted by economists says something about his ability as a mathematician and his refusal to give up. The (Mis)Behaviour of Markets is a thoroughly engaging piece, that has captured a great man's passion for his work. What more could you ask for from a book?

Hardeep Aiden is a graduate of the Department of Mathematics at Imperial College, London. Apart from mathematics, he is interested in languages and linguistics, and is currently learning Japanese, French and British sign language.