Since the middle of the 1980's I have been analysing mathematical properties of traditional ideo- and pictograms of the Tchokwe population in Angola. These drawings were traditionally done in sand, and were used to illustrate stories the men told at evening gatherings, around the communal fires in the village or at hunting camps. Young boys would learn the easier stories and accompanying designs, but only the storytellers, who were highly esteemed for their knowledge, and formed an elite, knew many more.

Sadly, colonialism and the slave trade caused most knowledge of the patterns to be lost. Some missionaries and ethnographers saved a few hundreds of them from oblivion, collecting designs and the accompanying stories to keep their knowledge alive.

Above is an example of a typical Tchokwe pictogram. It belongs to a very particular class of curves that I call "mirror curves". I discovered that these curves share interesting mathematical properties, and decided to define the class of designs they generate as "Lunda-designs". The Tchokwe are descendants of the Lunda people, and live predominantly in a region today called Lunda, hence the name Lunda-design to honour my source of inspiration.

The picture below presents examples of Lunda-designs. Do you find them appealing? Why?

Do you note something particular about these two-colour designs? Do they have some common characteristic?

You are invited to return to these questions at the end of this article. Before trying to answer more general questions, mathematicians - and not only mathematicians - like to consider more specific questions in order to get some feeling for what is happening. In this article we will reflect about a special class of Lunda-designs.

On the day before my daughter Likilisa's fourth birthday I started to analyse one particular class of Lunda-designs. As these designs turned out to have some interesting properties I gave them the name of Liki-designs. To the left are two examples.

How may we characterise a Liki-design? To get an idea try to copy one of the Liki-designs on squared paper in such a way that each unit square has only one colour. What can be said about the distribution of the unit squares of each colour?

Liki-designs may be presented in alternative ways, each of which is shown in turn below:

The distance between any grid point and the rectangular border is one unit of measurement (equal to the length of the side of a unit square) and the distance between two horizontal or vertical neighbouring grid points is two units. In the example above there are 3 rows of 5 grid points each. We will call the related design a 3x5 Liki-design. The corresponding Liki-matrix has dimensions 6x10 (6 rows and 10 columns).

Observe pairs of horizontal or vertical neighbouring grid points in this example. What can be said about the distribution of red and green unit squares in the middle between the two grid points?

What can be said about any two unit squares simultaneously adjacent to the border and to a grid point?

The defining characteristics of Liki-designs

These two local symmetry rules are the defining characteristics of Liki-designs, and imply the equality of the total numbers of red and green squares.

How many Liki-designs are there?

How many different mxn Liki-designs can be built up?

In order to avoid counting two designs as the same when actually you can turn one into the other just by swapping the roles of the two colours, we'll take the first number in the first row of the corresponding matrix to be 0. Let L(m,n) denote the total number of mxn Liki-designs.

Consider the open grid rectangle in labelled (a), with a 0 in the top left corner. By the first symmetry rule, both the horizontal and vertical neighbour unit squares have to contain a 1, as shown in (b). There are too few numbers filled in for us to be able to apply either of the construction rules. So we are free to choose the first number in the third row to be either 0 or 1. These two possibilities are labelled (c).

By twice applying rule (2), we obtain the two possible situations labelled (d). At the left and top borders we can apply rule (1) and complete a triangular array of numbers (labelled (e)).

Having only two rows of grid points at our disposal, we have already arrived at the bottom border, and can apply the first symmetry rule once again (labelled (f)), and immediately apply the second rule three times (labelled (g)). Once again we can apply rule (1) at the top and bottom border and with rule (2) fill in a diagonal array of numbers, and so on.

In order to get Liki-designs we now have to decide at what points it is possible to introduce a border on the right side.

In the first situation, this is not possible after one grid point, as it would lead to a matrix that does not satisfy rule (1) at the right border, as shown on the right.

In the second situation, the right border can be introduced after any number of grid points. Below are the cases n=1, 2, and 3.

So what can we say about L(2,n)? If n is even there are two Liki-designs (one of each type); if n is odd, there is only one Liki-design (of the second type). Table 1 presents this result in an alternative way.

Analogously, the following relationships can be established:

We can present these results together in a single table:

Observing this incomplete table, we may conjecture that L(m,n) is always equal to 1 if m and n do not have common divisors greater than 1. Examining the values in the table we might guess that the greatest common divisor of m and n plays an important role.

We may conjecture that

where gcd(m,n) denotes the greatest common divisor of m and n.

The reader is invited to prove this conjecture. The method of mathematical induction may be very useful. We will also use induction in the following section.

Here are the sixteen 5x5 Liki-designs. They all have two diagonal axes of symmetry. Can you see why this has to be so?

Let us try to prove more generally the theorem that nxn Liki-designs and Liki-matrices display diagonal axes of symmetry. We will use induction.

In the case n=1, there is only one square Liki-design, shown on the left, and it has two diagonal axes of symmetry.

Let us suppose that for m less than n, all mxm Liki-designs have two diagonal axes of symmetry. Let us consider an nxn Liki-matrix. As the triangular array at its top left corner may appear in building up a (n-1)x(n-1) Liki-matrix, this array must be symmetrical, by the induction hypothesis.

Now let us consider the first number F, either 0 or 1, in the last row but one of the nxn Liki-matrix. By construction rule (2), the first number to its upper right, immediately below the "toothed" side of the triangular array, has to be 1 if F=0, or 0 if F=1.

In both cases, the number sequence is symmetrical.

Now let us analyse what happens with the next oblique row, going from the bottom left corner to the top right corner of the nxn Liki-matrix. The first number of this oblique row is equal to the last number, as both are equal to 1-F by rule (1).

Now consider pairs of consecutive unit squares located between diagonally neighbouring grid points along this oblique row. Let us take any pair and let P and Q be the numbers inscribed in them. On the other side of the axis there exists a corresponding pair, shown to the right. Let S and T be the numbers inscribed in them. What can be said about their neighbouring numbers that belong to the expanded triangular array?

On the other side

In this way we have completed our proof.

Some Liki-designs also have horizontal and vertical axes of symmetry. Liki-designs of this type can be used to build up interesting magic squares.

Let us construct a number square starting with the 4x4 Liki-design shown below, using the following construction rule:

Write the numbers 1 through 64 in the unit squares from the left to the right, from the top row to the bottom row.

The set of numbers written inside the green unit squares is rotated through 180o about the centre of the Liki-design. The resulting number square is a magic square, as the sum of the numbers in any row or column, (or along the principal diagonal) is equal to 260.

(1) Along the border each grid point has always one red (=0) and one green (=1) unit square associated with it.

The second construction rule for Lunda-designs is a little more general than the respective rule for Liki-designs.

The second rule for Liki-designs was the following:

(2') Of the four unit squares between two arbitrary (vertical or horizontal) neighbouring grid points, two are red (=0), and two are green (=1) (this means that situations like the ones shown on the right are admitted too). 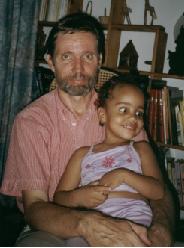 The geometrician Paulus Gerdes is former Vice-Chancellor of the "Universidade Pedagogica" (1989-1996, Mozambique) and President of the International Association for Science and Cultural Diversity. Among his books published in English are "Geometry from Africa: Mathematical and educational explorations" (The Mathematical Association of America, Washington, 1999), reviewed in issue 15 of Plus), "Women, Art and Geometry in Southern Africa" (Africa World Press, Trenton NJ, 1998), and "Lusona: Geometrical Recreations of Africa" (L'Harmattan, Paris, 1997).

You can contact Paulus Gerdes to talk about the ideas in this article by emailing him at pgerdes@virconn.com. The picture to the right shows him with his daughter Likilisa, after whom Liki designs were named.