News from the world of maths: The prisoner of polygonia

The prisoner of polygonia 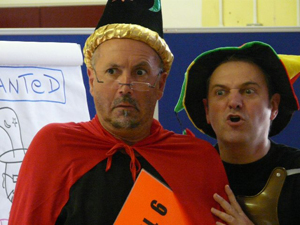 Plus doesn't usually report on primary school maths, but we couldn't resist telling you about a beautiful new maths play for key stage 2 students, which premiered today at the Royal Institution. In the land of Polygonia, where maths is the official language, Rhombus the maths wizard is falsely imprisoned on the orders of Queen Parabola. Data, a ten-year old girl, is the only witness. Before she can help him she must learn to speak the language of maths — and work out why the queen hates anyone who tries to make maths exciting.

Today's two performances, each in front of a full house, proved a great success with audiences made up of students from year 3 through to year 7 and their teachers. With their help, and plenty of laughs, Data managed to solve the puzzles facing her in her mission to save Rhombus, encountering prime numbers, number sequences, symmetry and more mathematical magic along the way. Data and the audience learn that no matter how difficult a maths problem looks, there's usually a trick which makes it simpler, and more fun. 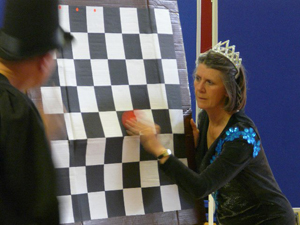 The prisoner of polygonia was written by Phil Lowe and Rob Eastaway, founder of Maths Inspiration. Your next chance to see the show will be as part of the Wales Maths Week 2009 in Cardiff on the 1st and 2nd of October (call 029 20 475 476 for tickets). If you would like to arrange having the play in your area, visit its website.