We've heard lots about MathsJams recently, but what exactly are they? Alison Kiddle explains...

As someone who has always enjoyed recreational mathematics, I was very excited when MathsJam first appeared on my radar back in 2010. A few people I know on Twitter started talking about a gathering being organised for people who wanted to do maths together. Before I knew it, I found myself joining getting on for 100 other keen maths folk for a hectic weekend of hands-on maths. Since then I have attended two more MathsJam conferences and started the Cambridge MathsJam pub meets. 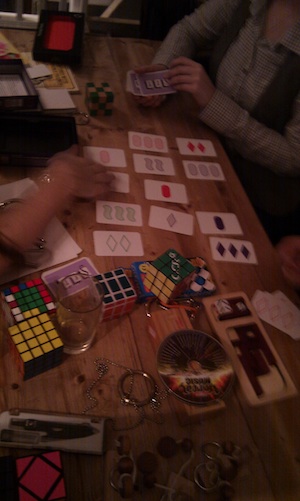 It's easy to spot the MathsJam table...

So what is a MathsJam? Let me start by describing the pub MathsJams. These began in London and were the brainchild of Matt Parker, also known as Stand Up Maths. Over time, more maths fans wanted to attend MathsJams near them, and at the time of writing there are more than 30 MathsJams in towns and cities in the UK and further afield. After the 2011 MathsJam conference, I was talked into setting up the Cambridge MathsJam, and we met for the first time in January 2012.

You can spot the MathsJam table in the pub because of all the maths paraphernalia lying around. I have a big bag filled with puzzles, Rubik's cubes, playing cards, dominoes, a couple of Martin Gardner books, paper, pens, glue, scissors, origami squares, post-it notes, and anything else that could come in useful. Each month, MathsJammers turn up with ideas for problems to discuss, and if we run out of puzzles we can always turn to Twitter where the #mathsjam hashtag and @mathsjam account are always full of news about what the other MathsJams around the country are discussing.

Of course there's also the obligatory games of SET – a wonderful card game where you have to spot sets of three cards before your opponents. And I make a point of teaching every new attendee of the Cambridge MathsJam how to make a dodecahedron out of post-it notes, a useful skill for any mathematician. (See James Grime’s excellent tutorial.)

The MathsJam conference has now become a highlight of my mathematical year. Held in November, it is a weekend of intense mathematical fun. This year's conference was just held in Crewe and over 100 people, including mathematicians, physicists, engineers, teachers, software developers, maths communicators and many other maths enthusiasts, came along from all over the UK.

The format for the conference is very clever: participants offer 5-minute talks, long enough to introduce an idea but not to teach anything new. Each hour-long session of around 10 talks is then followed by a half-hour coffee break where people can choose to explore the maths that interested them, or talk in more detail to the presenters. There is always plenty to look at in the breaks too, from mathematical knitting, to jugglers, to mathematical magic. 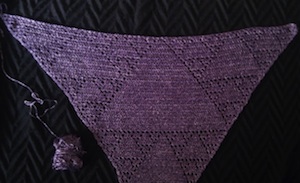 My talk at this year’s MathsJam was "n things you can do with squared paper", where I shared ideas including tiling with L triominoes, a puzzle where you need to make 100, and a way of shading squares to reveal the Sierpinski Triangle that can also be realised in crochet. Mine was not the only talk to refer to mathematical crafting – the team from Woolly Thoughts showed off some of their beautiful mathematical textile projects. Other talks looked at graphs that swear at you, the radius of a cube, technical problems arising from IP addresses using different bases, how the Egyptians built their pyramids, and many more fascinating topics.

The conference dinner was also great fun. I ended up on a table with a few people I knew and a few people I didn't, and before the soup had arrived we were already chatting like old friends sharing terrible mathematical jokes with one another, and talking about the benefits of owning a Raspberry Pi. The tweets on the #mathsjam hashtag all appeared on the big screen at the front of the room, and as more wine was sampled, the bad jokes and mathematical puns got worse. In the bar afterwards, there was a good mix of people playing SET, sharing puzzles and performing tricks. I had a good natter with some friends from Twitter while getting on with some mathematical crochet. I was buzzing so much from all the maths I found it very difficult to get to sleep, and ended up tweeting at 2am to say I’d finally found a proof for one of the problems set for me the previous day!

I really can't do justice to the pubmeets or the conference in just a few words. If this has whetted your appetite and you want to know more, I urge you to visit the MathsJam website and find a pub meet near you, or if there isn't one, to start your own! And if you are on twitter, follow @mathsjam and look out for the #mathsjam hashtag on the penultimate Tuesday of the month for all the mathematical puzzles and discussions your heart could desire!

Alison Kiddle is a former mathematics teacher and currently works as Key Stage 4 Coordinator for the NRICH mathematics project.