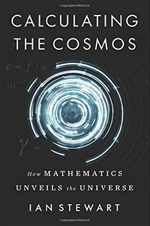 There is a quote attributed to Albert Einstein: "Everything should be made as simple as possible, but not simpler". This is the approach that Ian Stewart takes in his most recent book Calculating the cosmos, while taking his readers through a journey that starts at the beginning of the Universe and continues on through space and time to the present day. The subtitle How mathematics unveils the universe is aptly chosen: this is a book that chronicles the history of the Universe through people's attempts to understand it using mathematics. And yet there are very few formulas and technical definitions in the book. Stewart focuses instead on explaining the intuition behind mathematical models, making this book a smooth and friendly read to everyone irrespective of their scientific background.

The book is divided into nineteen relatively short chapters, each dedicated to answering a single central question, such as "how did our solar system form?" or "are there intelligent alien life forms?". Most chapters follow a similar structure: Stewart offers some motivation for the question at hand and then examines in chronological order the various ways people have approached it, from when it was first posed up to the modern day. He transitions from explaining one theory to the next very organically by pointing out the problems of the original theory, which in turn motivated and necessitated the development of new ones. Newton's laws might describe the effects of gravity as a force between two bodies very elegantly, but they cannot explain how exactly that force works. Many scientists, including Newton, tried to address that problem, but it remained unsolved until Einstein formulated his theory of general relativity centuries later. These transitions turn the multitude of scientific theories that Stewart examines into a coherent, easily-followed narrative, despite their apparent disconnectedness in the eyes of someone who might not have a good foundation in cosmology and physics.

The first few chapters concern the more traditional questions and approaches in cosmology, while the latter ones start delving into more modern theories such as dark matter and dark energy. Stewart makes a point of emphasising that all models are to some extent a simplification of reality, which often leaves room for interpretation. As a result, even questions that seem to have had definitive answers for hundreds of years can come back to the spotlight with new scientific discoveries and technological progress.

An example comes from a widely-accepted theory about the formation of the Moon: that something large collided with the Earth head-on and part of the resulting debris became the Moon. It was only a few years ago that scientists were able to perform accurate simulations to challenge the two main assumptions of that theory, namely the size of the impactor and the direction of the collision. This led to two new theories: maybe the impactor was much larger than originally thought but collided with the Earth sideways instead of head-on, or maybe it was much smaller but the Earth was spinning faster than it is today. So even something as seemingly resolved as the origin or the Moon still remains somewhat of a mystery. Therefore if there is a single most important message that Stewart is trying to convey through this guided voyage into the Universe, it's that we should always remain inquisitive and humble and ready to revise, because despite the incredible amount of knowledge we have accumulated over the years, there are still so many stones left unturned.

Stewart has a long history of writing popular science books and knows how to make the science accessible to everyone interested in finding out more about it. Whenever a theory might sound very convoluted or weakly motivated, he incorporates graphs, diagrams and illustrations as a visual aid. One of the very few instances where he includes mathematical formulas is when he examines the Titius-Bode law, which states that in our solar system the distances of the planets from the Sun follow a (nearly) geometric sequence. In the discussion that follows he presents a power-law formula for the distance of the nth planet from the Sun and solves it using logarithms. To illustrate why such a mathematical manipulation is useful, he then plots the actual log distances of the planets to show that they indeed follow a straight line, exactly as the power law formula would predict. To satisfy and help readers from a wide range of (non)scientific backgrounds, he also includes a few pages listing the most common scientific terminology that he needs to use, as well as references to the literature for the more mathematically inclined. The result is a book that will satisfy anyone who wishes to learn more about the Universe independently of how good their mathematical knowledge is.

Perhaps the best feature of Calculating the cosmos is Stewart's passion for mathematics and physics. His enthusiasm is contagious: in the end, we too are left in awe of the Universe and admiring the effort that science has put into understanding the final frontier.

"An example comes from a widely-accepted theory about the formation of the :"

Formation of the colon?!