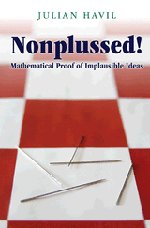 A review of a book as good as this must either repeat the positive adjectives other reviewers have used, or require a very large thesaurus. Since I find myself in complete agreement with all of the following words from other reviews, I will repeat them immediately: marvellous, crystal-clear, great, amazing, stimulating, delightful, fascinating, strong, surprising, classic, interesting, eclectic, insightful, magnificent. That one book could encourage such gushing praise seems as unlikely as one book being able to cram in a great variety and depth of mathematical problems, colourful historical anecdotes, significant nods to ethno-mathematics, difficult but well-explained proofs, clear and engaging prose and beautiful diagrams. Yet Havil's book succeeds on all counts.

That is what the book is like, but what is the book about? It would be easy to go along with the subtitle, mathematical proof of implausible ideas, but this would be like describing music as "nice noise": not untrue, but not giving the whole truth either. Nonplussed is about the most wondrous paradox of all: that the human mind possesses a "common sense" which fails utterly in the face of the very large, and yet also has the ability to understand this failure and create mathematical proofs which succeed in the most surprising and head-shakingly beautiful ways. The very large might be large values, or the law of averages and probability acting on very large groups. Both the big and the statistical bamboozle us.

One of the indisputable adjectives in the first paragraph is "eclectic" — the book's 14 chapters, one chapterette, and three appendices are each inspired by a different mathematical problem, and these are as diverse as imaginable, from tennis tournaments to touching hyper-spheres, through drinking vessels of infinite volume yet finite surface area, gambling, defying gravity, and chasing smugglers. Many of the problems are taken from the rich history of problem solving, in which, paradoxically, serious mathematics seems to have been more frivolous than today's school curricula would suggest.

The diverse examples appear to have been chosen for the wide range of mathematical techniques and ideas which they introduce. As importantly, the book repeatedly illustrates the mathematical process: formulate the problem by finding the best way to look at it, tackle the easiest case first, then the harder ones, then generalise, then diversify by changing the set-up of the problem, then repeat. At all steps there is the question "Can this be made simpler?"; if so, then deeper understanding is reached. Sometimes, the "implausibility" is that what holds for lower dimensions fails for higher ones, or that sudden leaps in complexity are encountered as a key number increases.

Without reading the book one might wonder how Havil manages to make these (mostly) old problems seem fresh and engaging. Partly it is the surprises these problems reveal to the student who works hard on them, surprises which disconcert and delight like an optical illusion. These problems include Buffon's needle, Torricelli's trumpet, and the Birthday Paradox. I first saw these problems at school and they really switched me on to mathematics. School teachers like Havil are still using these puzzles to engage kids today, in the class-room and in this book.

But the book's freshness also lies in the witty historical notes and extensive quotations from the mathematicians who boggled their brains before us. These notes mix original proofs with modern versions, and scans of historical documents with computer proofs. It sounds like the recipe for a messy and rambling book, but Havil's elegantly simple prose is skilfully clipped to ensure the smooth and speedy flow of the narrative. Indeed, the pace may surprise those readers more used to being led through tricky maths like toddlers through a crowd of crocodiles: kept so far away from the gnashing teeth that the beauty can't be appreciated either. It is refreshing to find a book aimed at young adults which treats their intelligence with respect. Everything required to develop the many ideas in this book is explained clearly, but with a conciseness necessitating work from the reader. This is a text to be worked with and thought about; it's not for the bedside table.

Old problems are constantly being revisited and reimagined by new generations of mathematicians, revealing surprises and new understanding, as well as educating new generations in old results and techniques. Even new problems don't have to be wildly imaginative to be hard and lead to astonishing depth. A good example of this kind, explained brilliantly in the book, is John Conway's Checkerboard Army. On first glance, this is an easy puzzle about where counters can end up when jumping over each other on a chequerboard. The surprising result, and Conway's neat proof which involves algebra, taxis and the golden ratio, leave the heart racing.

As a whole, the level of the mathematics rarely dips below that of the last years of high school, and several chapters require elementary calculus. Generally the later chapters contain the hardest, though not necessarily the most satisfying mathematics, but pencil, paper, and brain are required tools for almost every page. Computer experiments are used frequently, especially in the chapters dealing with questions of chance, yet Havil also upholds the role of human understanding: data and graphs alone are not enough. That several of the chapters deal with chance and games does not mean the mathematics they contain is any easier. For example, the chapter on Parrondo's Games, in which, seemingly paradoxically, "...two losing games can combine to a winning composite game," introduces the reader to some of the simpler ideas of Markov chains, which she probably won't meet again until well into her undergraduate career.

Being a first edition, there are naturally a few typos and odd editorial decisions (including a curious rotation of figure 10.5 with respect to figure 10.4). But the majority of the pages are visually pleasing and each contains an exciting part of the story. Chapters are headed by witty quotes from famous mathematicians, scientists, philosophers and artists of all kind. Most beautiful are the chapter motifs based on the story-telling sona designs of the Chokwe group of the Bantu people of Northeast Angola. These designs have a mathematical sophistication explored in a chapterette after the main body of the book and before the appendices. The brilliant writing, the wonderful problems, the weaving together of past and future, games and discovery, and world number cultures will have you returning to this ageless book time and again.

The defying gravity chapter of the book Nonplussed! has appeared in issue 40 of Plus.