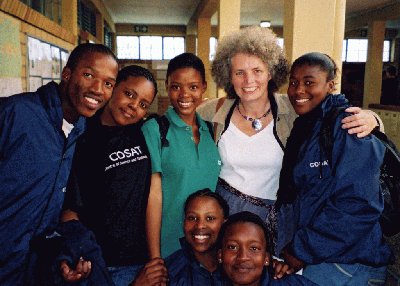 The Cambridge solar physicist Helen Mason accompanied a group of UK students and their teachers to South Africa, where they worked with several schools and visited the South African Large Telescope (SALT). The trip came about through MOTIVATE, which organises video conferences between schools and scientists all over the world, and is a sister project of Plus.

Helen Mason first visited South Africa in June 2004, the month of Venus' transit across the face of the Sun. Having given several MOTIVATE video talks involving South African schools, she decided to take the opportunity of a private visit to meet her conference partners in the flesh. A sleep-over at a Cape Town science centre was organised, and students from local schools had the pleasure of watching Venus' journey and hearing Helen explain the science behind it.

The visit convinced Helen that more could be done to help South African students and teachers: "The students we are targeting in South Africa come from townships that are economically disadvantaged. There is still quite a lot of inequality in the South African school system, and these schools suffer particularly. Even though the problems are being addressed by the government, there is still a severe lack of resources. Also, during the Apartheid years, black students were not taught any maths or science, because it was perceived that they would never need to use it. So there is a whole generation of missing teachers. The maths and science teachers are doing their best, but they themselves haven't had the chance to acquire a firm grounding. They need a lot of help and support to gain confidence. This is one of the issues addressed by the African Institute for Mathematical Sciences Schools Enrichment Centre (AIMSSEC), which operates in the Western Cape and has strong links with the University of Cambridge. Having said that, there is no lack of enthusiasm on the part of the students or teachers. They are very keen to learn and very highly motivated, it's a real pleasure to go and meet them."

After the Venus sleep-over, Helen worked with Brian Isaac's team from the University of the Western Cape, which runs a project supporting maths teaching in schools. "I went out to various schools as part of this project, and after that I was so highly motivated—the work seemed so valuable—that I was very keen to come back again. I also met some people from the South African Astronomical Observatory. They do a lot of work with schools, and they said that it would be very useful to meet some teachers and students from the UK. In the past, I've worked closely with a teacher called Mike Cripps, at Neatherd School in Norfolk. He's a keen astronomer and runs a very active astronomy club. He was quite keen to take the students in his astronomy club to visit the observatory in South Africa, and combine this with work in schools. So we put together a project called North and South, which links students of the northern and southern hemispheres by looking at the northern and southern skies." 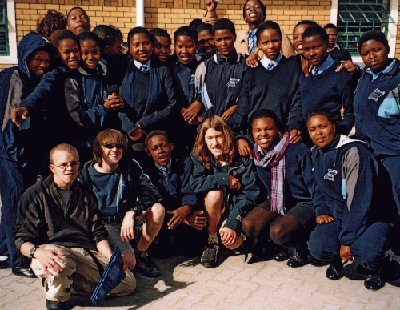 It is this project which, with funding from organisations including the Royal Astronomical Society and PPARC, took Helen, ten students from Dereham Sixth Form College, Norfolk, and two teachers (Mike Cripps and Graham Coleman) on a two week trip to South Africa in the summer. During their first week, the group visited a range of former township schools on the Cape Flats close to Cape Town. Working with science clubs or whole classes, they gave presentations, taught and shared equipment that is not normally available at the schools. Every one of the UK students was amazed by the enthusiasm and motivation of their African counterparts, even in the face of the dire economical situation. As Alex Doyle says on the North and South website: "I was amazed by the attitude of the South Africans, as we received undivided attention from most, if not all, of the students; they were much more eager to learn than many English students would have been. Over there, education is seen as a privilege rather than a right. At one school the lack of resources really showed, as this school had no books whatsoever in its library. This came as a huge shock to the whole group. These students had very little but still worked as hard as they could for their education."

The second part of the visit was spent at SALT, a state-of-the-art telescope, which will officially open this month. On the trip to Sutherland, the home of SALT, the students met up with maths teacher Reggie Cesar and his four grade 12 students from Vusisizwe Senior Secondary School, who were to work with them. The group visited the home of the student Yolanda Mbana in the township of Worcester. Talking to the township inhabitants and observing first-hand their way of life was, for all ten UK students, an experience which was only rivalled by the splendour of the South African night skies: "When we found out that we were to walk around a township we were all pretty scared. But when we got there we were welcomed like royalty, one man told me not to feel threatened by the people on the street, because if they knew what we were doing then they would welcome us to their homes" says Rory Graham. 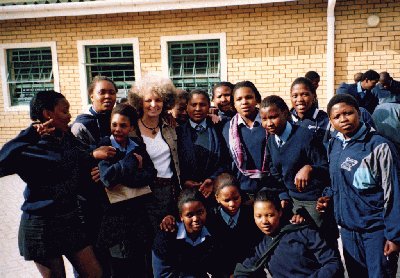 Once in Sunderland, the surrounding desert provided the most beautiful view of the sky the students had ever seen, while inside SALT they got to watch real astronomers and engineers working on one of the most advanced telescopes on Earth. The students filmed interviews with the scientists, and now their final task is to edit the material they gathered and present it on a website. This may take a while, but in the meantime you can find out all about the trip on the part of the North and South website that is already up and running. Overall, the project was a great success, using astronomy to connect students from different continents, and helping those disadvantaged by lack of resources or teachers. Helen Mason, for one, is sure that this wasn't the last trip. She's doing another MOTIVATE conference in the spring linking UK and South African students, and is hoping to visit Cape Town again soon. Helen said: "Photos and words alone cannot convey the life, colour and sounds of South Africa. The warmth of the welcome we received is something none of us will ever forget."