Not just a matter of time: Measuring complexity

As computers are constantly becoming faster and better, many computational problems that were previously out of reach have now become accessible. But is this trend going to continue forever, or are there problems computers will never, ever be able to solve? Let's start our consideration of this question by looking at how computer scientists measure and classify the complexity of computational algorithms. 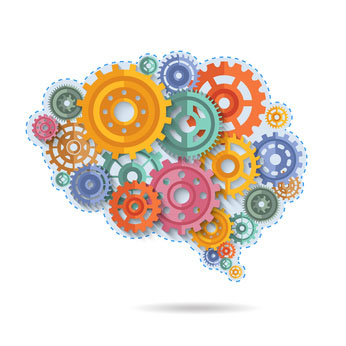 How complex is complex?

Suppose you are responsible for retrieving files from a large filing system. If the files are all indexed and labelled with tabs, the task of retrieving any specific file is quite easy — given the required index, simply select the file with that index on its tab. Retrieving file 7, say, is no more difficult than retrieving file 77: a quick visual scan reveals the location of the file and one physical move delivers it into your hands. The total number of files doesn't make much difference. The process can be carried out in what is called constant time: the time it takes to complete it does not vary with the number of files there are in total. In computers, arrays and hash-tables are commonly used data structures that support this kind of constant time access.

Now suppose that over time the tabs have all fallen off the files. They are still indexed and in order, but you can no longer immediately spot the file you want. This introduces the requirement to search, and a particularly efficient way to do so is a binary search. This involves finding the middle file and seeing whether the file you need comes before or after. For example, when looking for file 77, pull out the middle file and see if its index is smaller or larger than 77, and then keep looking to the left or right of the middle file as appropriate.

using a particular algorithm (e.g. searching for a file within a total number of

be a function of

has complexity, or order,

if there is a positive number

so that for all

With this single step you have effectively halved the size of the problem, and all you need to do is repeat the process on each appropriate subset of files until the required file is found. Since the search space is halved each step, dealing with twice as many files only requires one additional step.

for the total number of files, it turns out that as

the logarithm to base

(see the box below to find out why). We therefore say that a binary search is logarithmic, or, alternatively, that it has computational complexity

This is the so-called big O notation: the expression in the brackets after the O describes the type of growth you see in the number of steps needed to solve the problem as the problem size grows (see the box on the left for a formal definition).

of files to be searched is equal to a power of

. At each step you halve the number of files to be searched. If you are unlucky you need to keep on halving until you have reached

and can halve no longer. What’s the maximum amount of times you can halve

is of course the logarithm to base

. The number of files might not be an exact power of

of course, but the big O notation only indicates that the number of steps needed to complete the algorithm grows in proportion to

But what if over time the loss of the tabs has allowed the files to become disordered? If you now pull out file 50 you have no idea whether file 77 comes before or after it. The binary search algorithm therefore can't be used. The best option in this situation is a linear search, where you just go through the files one by one to find the one you need. The complexity of this search increases in line with the number of files, and so it is an

Clearly it was better when the files were sorted, so eventually you decide to put them all back in order. One way to manage this is by selecting each file in turn, starting from the front, and comparing it with all earlier ones, moving it forward until you find the place it belongs in the order. In this way the sorted order is rebuilt from the front, file by file. This simple sorting algorithm requires

steps (you can try and work out for yourself why this is true). And it brings us into the realm of polynomial time complexity. An expression of the form

is a natural number (

in our example) is called a polynomial in

. A polynomial time algorithm is one of order

This last example is the infamous and inefficient Bubblesort, and the number of comparisons required gets very big very fast. Fortunately many more efficient sorting techniques exist, such as Quicksort, and Mergesort, each with complexity

To see the difference this reduction in complexity makes, consider that for

comparisons on average, whereas Quicksort only needs around

and so is about 15 times faster. For

files, Quicksort is more than

times faster (thus reducing each minute of runtime to sub-second), and the advantage becomes even greater as

possible characters: for each character of the password you have

choices, giving a total of

and grows very fast with 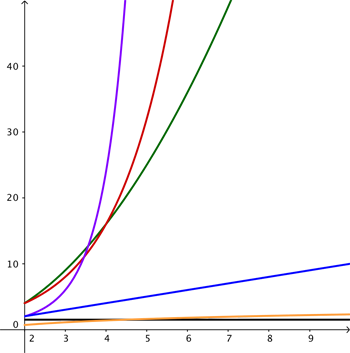 The famous travelling salesman problem provides an example of such an algorithm: the task is to find the shortest road circuit that visits each of

given cities exactly once. A naïve solution involves generating and checking all possible paths through every town and it weighs in at

These examples illustrate the complexity hierarchy for problems of size

is a constant greater than 1,

stands for constant time. Constant time problems are the easiest to solve, followed by

problems, and so on, all the way up to

In complexity theory, any algorithm with complexity described by a polynomial in

Some well known puzzles provide a powerful illustration of the growth rate of the exponential function. One example is asking

How thick would a regular piece of paper be if you could somehow fold it 42 times?

The answer is quite astounding – it would reach the Moon! (Indeed, fewer than 100 folds would be necessary to reach the limits of the visible Universe.) Another is the ancient wheat and chessboard problem that asks 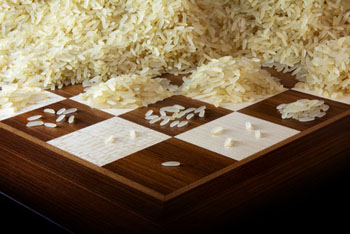 How many grains are on the last square?

How many grains of wheat would be needed to enable you to place 1 grain on the first square of a chessboard, 2 grains on the second, 4 grains on the third, and so on, doubling each time until all squares have been used?

The repeated doubling means this is an exponential process, and the 64th square will contain

Scott Czepiel beautifully describes the magnitude of this number on this website. One of his illustrations involves imagining that you start a timer to count down this many seconds, and begin to walk around the equator, taking just a single step every billion years. Then, each complete circuit, remove a single drop of water from the Pacific Ocean and start around the Earth again. When you have emptied the ocean, place one piece of paper flat on the ground, refill the ocean and start yet again. Repeat until the stack of paper reaches the Sun, then look at the timer to see how far it has counted down. The first three digits will not even have changed. The entire process must be repeated thousands of times before the counter reaches 0.

These examples illustrate why problems with solutions of such complexity are considered intractable. But such a consideration is rooted in practical concerns. What if we propel ourselves into an ideal future, to a time when we'll have all the computing power we need and no limits on storage? In the second part of this article, we will look at functions that grow much faster than exponentials and factorials, and see what implications such functions have for idealised computability.