If I told a cave man about the "centrifugal force" we experience as we go around a corner in a car, he wouldn't know what I was talking about because the fastest he's ever gone is running pace. It usually takes some personal experience to believe that something exists. We believe in centrifugal force because we have all experienced it. How about the gyroscopic effect?

Well, our daily experience doesn't include this one. If our bodies contained spinning parts we would notice. The closest we get is by feeling the strange tug on the hair dryer or the coffee grinder or the electric drill as we move it around quickly. Maybe we notice the clockwise weather patterns in England and the anti-clockwise patterns in Australia. What is going on?

Imagine sitting at the North pole. You are not moving, but the Earth is - it completes a full rotation about its north-south axis every 24 hours. If you sit at the pole for a full 24 hours, you will "turn on the spot" one complete rotation with respect to the space surrounding the Earth.

In general, if you stand on the one spot for 24 hours anywhere on Earth, your body will actually trace out a circular path in space as the earth rotates. At either Pole, the radius of this circle will be zero, and hence you will "spin on the spot" with respect to space.

The further you get from either pole, however, the larger the radius of this circle will be (until you reach the equator, where the earth is widest about its north-south axis). Now, it takes the same amount of time to trace out each circular path (24 hours), and therefore on larger paths you must be moving faster than on smaller ones. 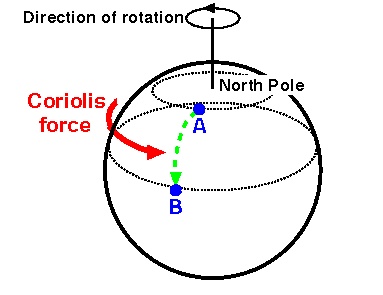 You can find some excellent animations of the Coriolis effect at the web site of the Danish Wind Turbine Manufacturers' Association. 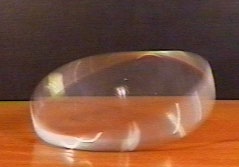 All that's needed to explore gyroscopic forces is a simple spinning disc, as shown in figure 2.

However, it's difficult to experience the gyroscopic effects produced by a spinning disc unless it's supported in some way, so you can pick it up and move it around. 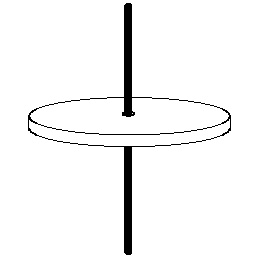 Figure 3 shows a very simple gyroscope - a disc that can spin around a fixed rod passing through its central bearing. Most gyroscopes that you'll come across are variations on this simple theme: a spinning disc supported in some way (such as in gimbals) so that it is free to rotate in all directions, but its centre will remain in the same place.

You can experiment with gyroscopes much more easily if they are motorised, and preferably battery-powered. In the Department of Engineering at Cambridge University we have a few hand-held battery-powered gyros, as shown in figure 4, and they do really strange things. 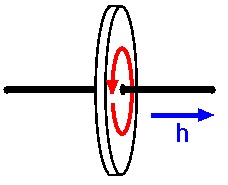 Angular momentum is a measure of the momentum of an object that is spinning. The direction of the angular momentum vector h of a spinning object is parallel to the axis of spin, as shown in figure 5.

Figure 6a: Holding the gyroscope horizontally.

Conservation of angular momentum can easily be observed if you sit on a swivelly chair while holding a spinning gyroscope. The chair is mounted on a pivot so that the chair can rotate about the vertical axis. If you hold the gyroscope so that its axis of rotation is horizontal (so that the spinning disc is in the vertical plane), the gyroscope's angular momentum is in the horizontal plane and there is none in the vertical plane (as in figure 5).

Figure 6b: Move it to the vertical and you spin around.

If you move the gyroscope back to the original position, your spin will again cease. Turn it vertically the other way, and you'll spin in the other direction. Enough to make anybody dizzy! This is a really fun experiment to do and it works really well if you're skinny - less than 8 stone and you'll spin really fast!

Another explanation for precession is that Newton's law for rotational motion says Q=dh/dt where Q is the applied couple and h is the angular momentum vector. To cut a long story short, this means that the angular momentum vector is changed by a small amount in the direction of the applied couple Q. So the axis of rotation (which is in the same direction as h) will move a little in the direction of Q.

If a spinning gyroscope is mounted horizontally at one end, precession will occur. Let's look at the forces involved. 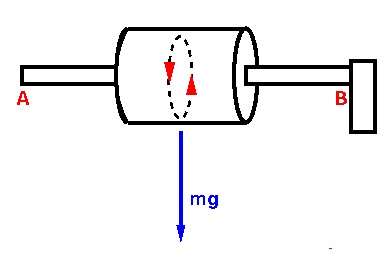 In figure 7, a spinning gyroscope has been mounted horizontally at one end (B). The centre of gravity of the gyroscope is midway between the free end A and the mounted end B, so the gravitational force mg (where m is the mass of the gyroscope) acts at a distance from the mounting point. There is therefore a couple Q along the z-axis, pointing out of the page (see the discussion about couples in this issue's boomerangs article).

Figure 8: A toy gyroscope, spinning while dangling on a string.

If you have a toy gyroscope at home, you can easily observe this effect yourself. Spin up the gyroscope and dangle it from one end on a piece of string, as shown in figure 8. The gyroscope will rotate around the string due to precession under gravity.

If you've ever tried to pick up a heavy pole while keeping it horizontal, you'll know that it's much easier to do this by picking it up in the middle (at its centre of mass) than by picking it up by one end.

The motorized gyroscopes are quite heavy - they typically weigh 10kg - and normally it would be very difficult to pick up a mass like this from the end with one hand while keeping it horizontal. (Note that it wouldn't be so difficult to hold it horizontally if you were allowed to pick it up under its middle.)

Now, if you set the gyroscope spinning, a curious thing happens. As long as you allow the gyroscope to precess as you're picking it up (i.e. you turn yourself in the direction it wants to go as you're holding it), you find that you suddenly can pick it up from one end, and in fact it feels about as heavy as it would if you picked it up from the middle. This allows you to perform what look like amazing feats of strength!

There was a famous Professor Laithwaite who used to demonstrate this effect and claim that gyroscopes were anti-gravity devices because you could pick them up more easily when they were spinning. (Sadly, he died before he could make his first space ship propelled by his anti-gravity gyroscopes!)

In fact, of course, there is no "anti-gravity effect" due to gyroscopes. Using your understanding of couples and gyroscopes, can you explain what's going on here?

Try this at home!

Obviously, most people won't have a motorised gyroscope at home. However, all the same effects can be observed with a toy gyroscope like the one shown in figure 8. If you're interested in a more powerful physical experience of gyroscopic effects, you can build yourself a gyroscope using an ordinary bicycle wheel with a foot-peg or other rod attached to the axle as something to hold on to.

To find out more about gyrospcopes, visit Hugh Hunt's website.

where JΩ is angular momentum.

This is the equation i get when modeling a wind turbine as a suspended spinning bicycle wheel. This means that a moment will act on the turbine, tilting the nacelle either up or down.

But what about the resisting torque when one attempts to yaw the turbine by applying a ω through a yaw motor. This equation doesn't help me right, since im applying a ω and the JΩ stays the same. so there should be a torque generated somehow resisting the yaw?

You are assuming that due to the gyro effect, it would require a large moment to 'yaw' the spinning turbine. Since there is no 'component' of the rate of change of angular momentum, when resolved around the yaw axis, the moment from the gyro effect is zero.

With respect to the excellent Channel 4 programme you produced on recreating the famous dambusters raid, have you any views on the gyroscopic effect the spinning bomb may of had on trying to control, for alingment purpose, the Lancaster bombers during the attacks on the dams?