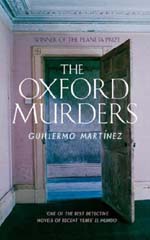 It's never easy for me to read a work of fiction based in and around a world I'm familiar with. Quite often I find that the author will make some small error of fact, perhaps about something very minor, which then stops me from enjoying the book as a whole because I begin to wonder what other facts, in areas that I know nothing about, are also incorrect.

I was, therefore, wary when I picked up The Oxford Murders. It's a crime novel, set in a place I am fairly familiar with, with a plotline and characters heavily involved in the world of academic mathematics. I have lived on the outskirts of this world for the past 12 years, and in that time I have come across countless examples, in book and film, of sloppy, meaningless and invented mathematics - or mathematicians for that matter - used in a story simply because the author believes it adds some degree of intellectual cachet.

But I am pleased to say that Martínez does not fall into this trap. The maths which appears in the book is both accurate and fundamental to the plot, and it is not surprising to learn that Martínez has a PhD in maths himself. He obviously enjoys his subject, and is able to use his characters to explain some tricky mathematical and philosophical concepts to his reader with an ease and clarity which shows he has a gift for communication.

The story is narrated by a 22 year old Argentinian maths postdoc who arrives in Oxford for a year-long research post. Within two weeks of settling in, he discovers the murdered body of his landlady and also meets Arthur Seldom, a mathematical genius and one of the leading experts on logical systems. Seldom has received a note from the murderer which simply states: "the first of the series", followed by a drawing of a circle, and it is obvious that the killer is familiar with his work.

The two mathematicians find themselves drawn into the killer's game as they try to predict which symbol will be next in the series - another symbol appears each time the killer strikes. Along the way, Seldom teaches the narrator (and the reader) the basics of logical series, Heisenberg's Uncertainty Principle and Gödel's Incompleteness Theorem.

But, although the mathematical elements are dealt with successfully, the novel does have some flaws. Martínez has a tendency to be a little too didactic at times and his characters sometimes seem improbably knowledgeable - acceptable in a mathematical genius, but more unlikely among the minor characters. There is also a sparseness to the storyline which is a little frustrating. No fact is mentioned, no character is introduced, unless they have some bearing on the central plot. In a non-genre novel this might have worked more successfully, but in a crime novel it has the effect of making the storyline seem a little too contrived.

This is not to say that the book is badly written. Martínez is clearly a writer of some talent and he writes with assurance and style, communicating his mathematical concepts clearly and interestingly - especially impressive when you remember the book was translated from the original Spanish. The reader is not surprised to discover that it was awarded the Planeta Prize in Argentina. This is Martínez's first novel to be published in the UK; hopefully, it will not be his last.

Andrew Stickland is a freelance writer and copyeditor. He has written articles for various publications on subjects as diverse as travel, war-gaming and statisticis, and regularly reviews some of the most accessible mathematical books and films, as well as providing the occasional article and photo for Plus.
Tweets by plusmathsorg