Share this page
If you've ever redecorated a bathroom, you'll know that there are only so many ways in which you can tile a flat plane. But once you move into the curved world of hyperbolic geometry, possibilities become endless and the most amazing fractal structures ensue. Beautiful images such as these form the heart Indra's pearls: the vision of Felix Klein by Caroline Series, David Wright and David Mumford. 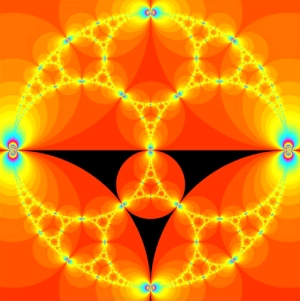 For a feel of the book read our short introduction to the maths behind their beautiful images. In the book itself, as well as pages of stunning images, you'll find instructions for how to create the images yourself, as well as detailed explanation of the mathematics involved. One of the most compelling ideas is the way these contained images can represent the infinite. In many eastern philosophies, especially Buddhist, this idea of the infinite appearing from copies within copies is pervasive: "In a single atom, great and small lands, as many as atoms." This concept was so exactly reflected in the mathematics of their pictures that it inspired the title of the book, taken from the ancient Buddhist myth of Indra's Web:

In the heaven of the great god Indra is said to be a vast and shimmering net, finer than a spider's web, stretching to the outermost reaches of space. Strung at each intersection of its diaphanous threads is a reflecting pearl. Since the net is infinite in extent, the pearls are infinite in number. In the glistening surface of each pearl are reflected all the other pearls, even those in the furthest corners of the heavens. In each reflection, again are reflected all the infinitely many other pearls, so that by this process, reflections of reflections continue without end.