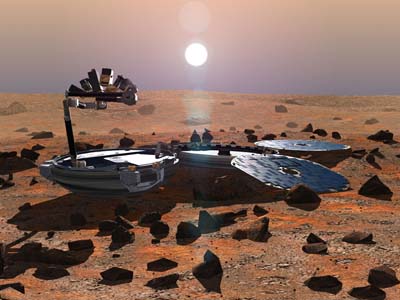 Artist's impression of Beagle 2 on Mars. All Rights Reserved Beagle 2

My personal view is that, if we have not received a signal within 5 to 10 days of [2 February], then we have to assume Beagle is lost.

Poor Beagle 2. On Christmas morning 2003, there were a good many people who were thinking more about what was taking place 250 million miles away than about what might be waiting for them underneath the slowly shedding fir tree in the corner of the room. It was an exciting moment - the British were about to land on Mars - and the future looked bright for Britain's space industry.

One month later and things look a lot different. There has still been no word from Beagle and with each passing day of silence, the chances of there ever being grow even more remote. The headline "The Beagle is Stranded" has been cropping up everywhere, as has the old War of the Worlds quote: "The chances of anything coming from Mars are a million-to-one..." To make matters worse during this difficult and frustrating time, not only did NASA successfully land its own rover and start beaming back full-colour photos of the Martian scenery, it went and did it twice!

So why is Beagle still in the news? Why are people still flocking to the project's website? The answer is because people still feel that the mission was a success. Even if there is never any communication with Beagle and no data is ever received, the fact is that British scientists and engineers still landed a probe on Mars. It's a terrible shame that the project wasn't a technical success, but maybe the next one will be. Or the one after that. Because one thing Beagle has done is generate a huge amount of interest in space exploration within the UK and this will, hopefully, translate into something more tangible - increased funding for a start.

Beagle 2 cost £45m - one fifth the cost of the NASA Spirit rover which so quickly eclipsed it - and though it would be kind to say that this is because the British are more careful with their spending, the real reason is more likely to be the huge disparity between the levels of funding in the UK and the US. NASA's annual budget is £8.2bn. The British National Space Centre (a collection of government departments and research councils which is the closest thing we have to a national space agency) annually spends around £180m - not much when you consider how many companies and organisations are competing for the money.

But even more important than funding is the need for fresh blood. Britain's space programme is run by people who were first drawn to the wonders of space in the 1960s and 70s by the Apollo missions when space exploration was new and exciting and the future seemed full of limitless possibilities. Now these pioneers are heading towards retirement, and there is a real need for younger scientists and engineers to take their place. But in recent years there has been little to excite them. As Colin Hicks, Director General of the BNSC points out: "We don't participate in the manned space programme because we can't afford it. We don't participate in the space station because we can't afford it. And we don't participate in launches because we can't afford it."

So British scientists are left with the more "hands-off" aspects of space research; getting someone else to deliver their equipment into space so they can study the cosmos through experimental data and theory. And while this is valuable work, it's not exactly pulling in the crowds. But now Beagle 2 comes along and suddenly space exploration is exciting again. And although it's not what Beagle 2 set out to be, it's definitely in that grand British tradition: the heroic failure every bit as memorable and inspiring as if it had been a success.

As regular readers will know, in each issue of Plus we talk to people who have decided to make maths a part of their career. We believe that maths gives people the edge in the job market, and with each new issue of Plus, our growing collection of career stories - archived in our career library, becomes an increasingly valuable resource.

So it is particularly exciting that we at the Millennium Mathematics Project have been given a grant by EPSRC, the Engineering and Physical Sciences Research Council, to produce a collection of posters about Careers with Maths. The posters will be supplied to schools in the UK free of charge, and will be a great resource for teachers who need to talk about careers to mathematically minded students - and, backed up by our website, they will be a new contribution to reversing the longterm decline in numbers going into the numerate sciences that is so worrying our universities, employers and government.

So watch this space! By the next academic year, your school maths department should look a little more colourful.