With the aim of raising worldwide public awareness of the subject, 2005 has been designated World Year of Physics. It is also the centenary of Einstein's "annus mirabilis", the year when - aged only 26 - he published three papers that together changed the way we view the universe.

In the UK and Ireland, a consortium led by the Institute of Physics is running a year of activities under the banner "Einstein Year". You can celebrate Einstein's birthday on March 14th (during National Science Week) with a special Challenge pack full of fun physics experiments to be performed at a party. Or you can play "Time twin" on the Einstein Year website, saving your twin brother before relativity leaves him to age and die while you remain young and beautiful! And if you are thinking of holding your own event to mark the year, you can download a Physics to go pack, with lots of useful suggestions and information. 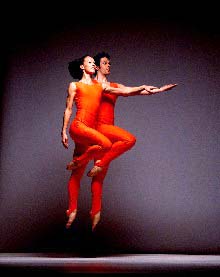 The Rambert Dance Company will be performing a specially commissioned work, Constant speed, at Sadler's Wells in London between May 24th and 28th. It is inspired by "the fizz and sparkle of molecules ricocheting in space", and takes as its epigraph a quote from Einstein: "Human beings, vegetables or cosmic dust, we all dance to a mysterious tune intoned in the distance by an invisible player". (Read more about this collaboration in a previous news story on Plus.)

If you are more interested in music than dance, why not download Einstein (not enough time), a love song by East London rapper DJ Vader which has been adopted as the year's theme music? Or, if you are a world-class stunt cyclist, you could always try doing the "Einstein flip", a new bike stunt created by Cambridge physicist Helen Czerski and BMX rider Ben Wallace. Drawing on a variety of physics theories, including the conservation of angular momentum and Newton's laws of motion, the stunt was created using computer simulation. 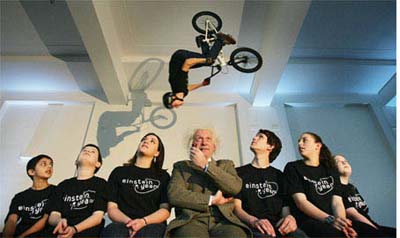 The range of activities available is astonishing and exciting - rather like the extraordinary burst of creativity that made Einstein unquestionably the world's best known scientist. So why not get involved? And, as you do, remember that it is to Einstein's miraculous year that we owe our knowledge of Brownian motion (which causes the dancing motion of microscopic particles), the photoelectric effect (light is both a wave and a particle - the work Einstein won his Nobel prize for) and special relativity (e=mc2, the most famous equation ever).