The Plus office has opened in Barcelona! The weather is fine, the architecture is spectacular and everyone has been very friendly. And, importantly, the food is delicious! From the welcoming dinner with the conference organisers (and a delicious glass of port), to the focaccia de xocolata from the cafe round the corner to the pigs skin tapas we tried last night! 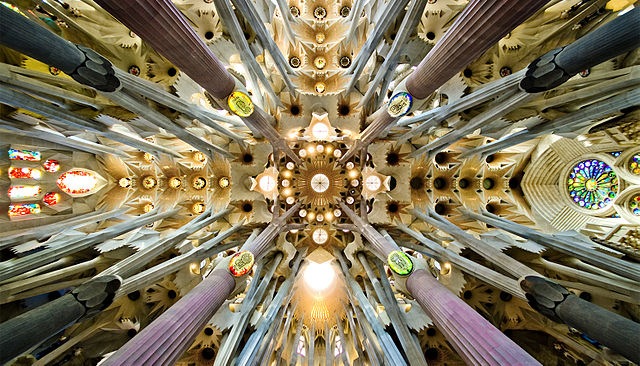 I'm here as part of the Imaginary/BCN conference, inspired by the success of the Imaginary exhibition, which has, so far, been shown in twelve cities across Spain. Each city made the exhibition their own and the conference started with Ferran Dach and Maria Alberich explaining Barcelona's approach by showing the connections between maths and the art and architecture of the city. They juxtaposed photos of the vaulted ceilings of cathedrals, the corners of intersecting arches, the minarets on modern towers with images of mathematical singularities (eg those points where curves are not smooth). Maria believes that behind every feature in art and architecture is symmetry or mathematical singularity – these structures capture our attention and direct our gaze whether in a mathematical image or a work of art. They also showed a particularly striking Spanish example of maths influencing art: The swallow's tail by Salvador Dalí which was based on mathematician René Thom's catastrophe theory. (You can read more on maths and art and architecture on Plus.)

The theme of mathematics and art continued with Maria Teresa Lozano showing a series of plaster models of mathematical surfaces made in Germany in the nineteenth century under the direction of famous mathematicians such as Felix Klein. These models are of highly complicated surfaces yet they are incredibly precise. But no one knows how they were made with such accuracy, the trade secret that seems to have vanished. It was lovely to see the forms of these surfaces appearing, consciously and unconsciously, in the work of many sculptors.

In the afternoon it was time for me to do some work and I joined Raúl Ibáñez, Andreas Loos and Thomas Vogt for a panel discussion on popularising maths. The question that stimulated the most discussion was – why are we communicating maths to the public? There were plenty of practical answers: encouraging the next generation of mathematicians, showing the maths that is part of our daily live, funding requirements. But people, including us here at Plus, have more personal reasons too. We love maths and we want to share its excitement and beauty. We want to show that maths is a creative, dynamics, human pursuit and that new mathematics is being discovered all the time. It isn't some solid stone edifice that has stood since the dawn of time - it is a beautiful astounding cathedral that is being constructed by mathematicians today and every day, yet it will never be complete. There will always be more to know, and that makes maths a very exciting world indeed.

Today we are focussing on the Imaginary exhibition itself and I'm off to a talk about the taste of mathematics, a collaboration between chefs and mathematicians!