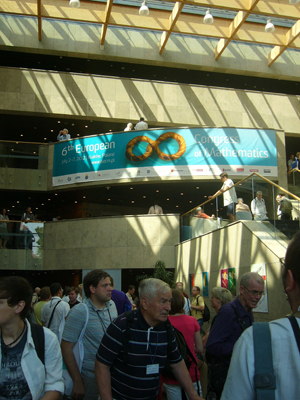 The European Congress of Mathematics. The logo is an infinity-shaped pretzel!

Greetings from the beautiful city of Krakow, where the 6th European Congress of Mathematics opened yesterday! Around 1,000 mathematicians, donning straw hats and flip-flops to resist the incredibly hot weather, have come together here to chat, share and listen to lectures, and Plus will be reporting from the congress all week.

The day started with the Oscars of European mathematics: at the opening ceremony the European Mathematical Society awarded prizes to twelve young mathematicians for their excellent contributions to maths, their subjects ranging from geometry and group theory to chaos theory, quantum chemistry and the history of maths.

After that it was a conference lunch including infinity-shaped pretzels, and then the auditorium filled once more to hear Adrian Constantin's fascinating talk on water waves — it's not the water that moves with the wave, but the wave moving through the water. And when a wave breaks the maths that describes it seizes to work. I'll be talking to Constantin about his maths tomorrow and you'll be able to read an article on Plus soon. I'll also be interviewing Marta Sanz-Solé, the President of the European Mathematical Society. 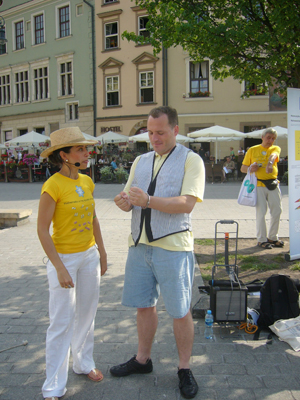 Sara Santos and her maths buskers on the streets of Krakow. The challenge here was to turn the waistcoat inside out while being handcuffed.

But the congress isn't just about mathematicians talking to each other. After the lecture I went in search of Sara Santos, who has taken her mathematical buskers to the streets of Krakow, handcuffing innocent Krakowians (a punishment for dividing by zero), constructing emergency pentagons, and reading minds. But as Sara says, it's not about magic tricks but about the magical fact that the world we live in is written in the language of maths. You can hear from some maths buskers in our podcast to be published soon and if you'd like to become a maths busker yourself, visit the maths busking website.

Krakow really is as beautiful as everyone says. It's the oldest city of Poland with an amazing medieval market square, the largest in Europe. And the town has picked up the mathematical theme with no less than three art galleries showing mathematical art — if I find the time between lectures, interviews, and wine-and-canapé receptions, I'll go and visit. But now I'm off for the last task of today: investigate the specific gravity of Polish beer. 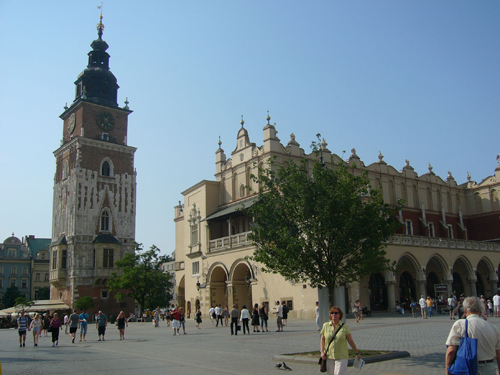 Krakow as the oldest city of Poland

Permalink Submitted by Anonymous on July 3, 2012

Well, I feel obliged to correct the author's statement about Krakow. It is not the oldest city of Poland. There are older. For example Gniezno which was the first capital. Moreover, the oldest city is Kalisz (but nowadays it is rather small city, so foreigner can be unaware of its existance).
Best regards,
B.Z.