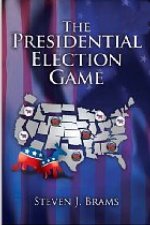 If you ever have been (or wanted to be) involved in a school or office council which has to be elected by popular vote, you have a fair idea of the sort of considerations that have to be taken into account when planning a winning strategy.

Who are the competitors? What are the important issues for the voters? What is the standing of most of the electorate in those issues? Would you try to adopt the position that attracts the most voters, or the position that alienates the least? Surely, you could not do better than adopting the middle ground, or could you? Is there a sure-fire winning strategy? What do you do, as a voter, when your preferred candidate stands little chance of winning? How do you act if you are in the position of such an unpopular candidate, how do you go about forming a winning coalition, and how do you maximise your share of the spoils, should your coalition win?

The presidential election game, by Steven J. Brams, contains the answers to these questions. Using various mathematical and game theoretical models, the author demonstrates why certain campaign strategies are more effective than others and supports his analysis with historical evidence.

This book, originally published 30 years ago and republished this year in a new edition, is a collection of essays presenting an analytic treatment of strategy in the race for the US presidency, from primaries, to national conventions and general elections.

The first chapter presents a spatial analysis of the positions of candidates in a single issue campaign and finds a guaranteed winning position. Brams represents the candidates' positions on the issue on a continuous scale from the left-most to the right-most (literally, politically speaking) and uses simple methods to find that the median — the most central position — is the equilibrium position in a two candidate race. We also learn how a third (and fourth candidate) can squeeze any of the original candidates out of the race.

Such a single issue situation can arise, for example, in the setting of the primaries, where all candidates belong to the same party. Voters don't decide who to support on the basis of party allegiances, but rather on the position the candidates take on a certain important policy. Brams's result is in fact backed up by evidence from real elections: since 1980, candidates who took centrist positions (or at least appeared to) have won the primaries contest, and proceeded to the national convention. The latter is dealt with in the second chapter, where Brams uses a probability model to explain how and why delegates may shift their votes from one candidate to another.

But it's not just policies that win you an election: money, the subject of the third chapter, is just as important. Brams looks into the allocation of resources that candidates should make in each state, so as to convince a maximal number of uncommitted voters or delegates. By studying the Electoral College system in the general election, as opposed to the popular vote, we see how and why larger states may be favoured when it comes to distributing the resources of the campaign.

In the US power, as well as money, seems to be monopolised by the two major parties. Less prominent candidates do exist, however, often representing minority groups. For these minor candidates coalitions are the only way forward. Chapter four deals with models for coalitions using game theory. Stability is a major issue here — there's no point in forming a coalition if its members are unhappy and likely to defect — and Brams's analysis shows that size really matters: a coalition mustn't be too big for its own good.

The game that presidential candidates play does not end with their being elected. There are great advantages to be gained amongst the different factions of government, and each can out-manoeuvre the others. Chapter five uses game theory to explain why the actors of the Watergate incident acted the way they did, and why they couldn't do better, despite the existence of a mutually beneficial solution.

In the final chapter Brams proposes an alternative to the current US voting system. In the US voters do not elect their president directly, rather they choose representatives who are pledged to a particular candidate. Each state has a number of representatives depending on its size, and collectively these representatives form the Electoral College. This means that it is possible for a candidate to take the White House without winning the popular vote, and this has indeed happened in the past.

Approval voting (AV), suggested by the author, tries to address this issue. In AV voters can vote for, or approve of, as many candidates as they wish. Each approved candidate receives one vote and the candidate with the most votes wins. Brams argues that under AV, voters would be able to express themselves more sincerely. They can rank candidates and decide where they draw the line between those they consider acceptable and those they consider unacceptable. They can vote for their preferred choice while also approving of other candidates that represent their views to a minor degree. Brams shows that the candidate with the greatest overall support will generally win; and that such a victory is an equilibrium from which voters with the same preferences have no incentive to depart.

The presidential election game is a well-written and well-structured book. It illustrates how simple mathematical models can shed some light on electoral procedures, giving them scientific transparency. Nevertheless, mathematics can only model perfectly rational behaviour. The conclusions of these models do not necessarily apply to real life; after all, electoral behaviour, like all social matters, is not entirely regulated by cold logic.

You can find put more about approval voting in Steven Brams's Plus article Mathematics and democracy.

Karla Diaz Ordaz obtained her PhD in mathematics at Imperial College London in 2006. After a year as a post-doc, trying to uncover the deepest secrets of mathematics on the beaches of Rio de Janeiro, she now does research on ergodic theory at the University of Warwick.