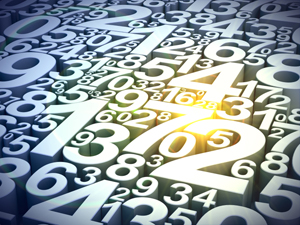 The number N represents the first 6 digits of a special number. N consists of three prime numbers put side by side. These three prime numbers come xth, yth and zth on the list of primes, where x, y and z are themselves three consecutive primes (for example, x, y and z could be 3, 5 and 7, in which case we'd be looking at the third, fifth and seventh prime numbers). In addition, if N is split in the middle into two separate numbers, the prime factors of the left part of N add up to its right part. What is N? And what is the special number whose first 6 digits it forms?

This puzzle was contributed by Aziz Inan, Professor of Electrical Engineering at the University of Portland. His own name, when written in capital letters, is a geometric word puzzle. Swap the vowels and turn the consonants 90 degrees and the words have switched places. "My parents didn't plan this," he says. "It's just fun."

If you have a puzzle you think might interest Plus readers, please email us!

After going from 11 to 97 and looking for consecutive primes that pass the N split test, I found none. So is the question flawed, or can you clarify the "N is split in the middle into two separate numbers, the prime factors of the left part of N add up to its right part" requirement?

Ok, it's pi. It took some head scratching but I see it fills all criteria. The prime factors of 314 are 2 and 157 which add up to 159 which is the second half of N. Great puzzle thanks.

3 is the second prime, not the third.

Although 1 is only divisible by itself and "1", seemingly meeting the definition of a prime, it is by convention excluded from the set of primes.

I suppose this is because of all its additional special properties. If you were to count 1 as a prime factor in a greater number, how many occurrences of it would you give this factor? An infinite number would be possible.