Putting it in perspective

Rachel Thomas Share this page
Ever since the Renaissance, painters have used projective geometry - the mathematics of perspective - to render accurately our three-dimensional world on a two-dimensional canvas. Now researchers are using the same mathematics to recreate the three-dimensional reality of pedestrian crossings from photographs, in order to assist the blind.

Obviously, it is difficult to cross roads when you are blind. Currently some - but by no means all - pedestrian crossings are installed with sound equipment, indicating when it is safe to move. However, it may also be important to know the length of the crossing. Rather than leaving blind people relying on experience to figure this out, Tadayoshi Shioyama and his colleagues at the Kyoto Institute of Technology are using image analysis to make things easier.

We are all used to the idea of perspective - train tracks converging in the distance and objects appearing smaller as they move further away from us. These phenomena occur when our 3D world is projected onto a 2D plane - a retina, painting or camera film. By analysing the geometric properties of shapes in the projected image, we get information about the 3D reality behind the 2D image. 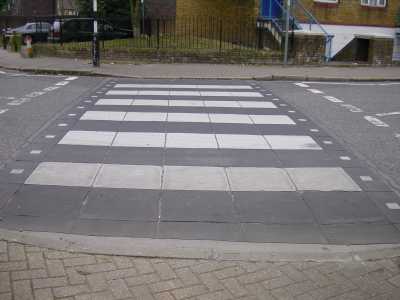 The farthest white line appears smaller than the closest

The researchers looked at pedestrian crossings marked with black and white lines, as they are in Japan and some other countries. Using projective geometry, they developed a method of analysing the image from a single camera to estimate the length of the crossing. The equally-spaced and equally-sized white lines are foreshortened in the image as their distance from the camera increases. By analysing the changing shapes of these lines in the image, the resarchers estimated the length of the crossing. Experimental results have shown that the system only produces an error of 5% - or less than one step.

In the paper (in Measurement Science and Technology), the researchers also used other sophisticated mathematical techniques to tell whether a traffic light was green or red. Professor Shioyama said: "We hope the work in this article stimulates the development of such devices to assist the blind."

The same technique has been applied in image analysis of paintings by artists from as far back as the 15th century, when perspective was first used in painting. The Visual Geometry Group from the Department of Engineering Sciences, Oxford, are using projective geometry to recreate three-dimensional scenes depicted in old works. So projective geometry not only helps blind people to move forward, but allows us to step inside history as well.

The 3D reconstruction of La Trinita was created by Antonio Criminisi while he was part of the Visual Geometry Group at the University of Oxford. For more examples of this work and for details of his book, Accurate Visual Metrology from Single and Multiple Uncalibrated Images, you can visit his web page.

Read more about...
mathematics and art
Projection
Tweets by plusmathsorg