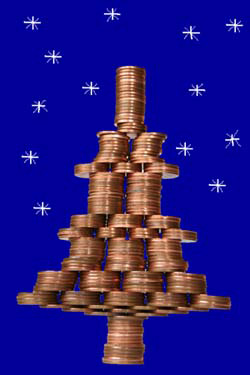 As a last treat before the start of the busiest period of the year, Santa Claus and Rudolph the Reindeer decide to go out for a meal. The Easter Bunny comes along for company. They feast on scrumptious food and mulled wine, which makes Rudolph's nose glow redder than ever. At the end of the night the bill totals 30 North Pole Pounds, and the three decide to share it evenly, each paying 10 Pounds. The waiter takes the money and walks over to the til, where he meets the proprietress of the restaurant. She tells him that for these very distinguished guests the last bottle of mulled wine is on the house. That bottle was 5 Pounds, so now the bill only comes to 25 Pounds. She gives the waiter 5 Pound coins in change. But the waiter, not being a very honest sort and still holding a grudge about an undelivered present, slips two Pounds into his pocket and only returns 3 Pounds, 1 Pound to each of the three guests.

Now each has paid 9 Pounds, making 27 in total. The waiter stole 2 Pounds, making 29. But Santa, Rudolph and the Easter Bunny paid 30 Pounds in total! What happened to the missing Pound?