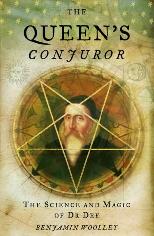 The Queen's Conjuror - The life and magic of Dr Dee

Although some people might find maths deadly boring, very few of us would think it could ever be deadly dangerous. But deadly it was in 16th century England, and one of those who followed the dangerous and mystical path of a mathematician was John Dee, the subject of this book.

The book follows Dee's life, particularly focusing on his part in the very early stages of the scientific revolution. Like many of his contemporaries, Dee was a scholar of many subjects, including mathematics, astronomy, geography, astrology, physics, alchemy, law and philosophy. But at the time mathematics was still widely regarded with suspicion. "Mathematics was still popularly associated with the magical 'black arts', the term 'calculating' (sometimes corrupted to 'calculing') being synonymous with conjuration", Woolley says.

Although regarded as a prominent scholar of his day, and at times a close confidant of Queen Elizabeth, Dee's reputation was always tainted by his fascination for the "dark arts". During the reign of Mary Queen of Scots Dee was charged with "calculating", "conjuring" and "witchcraft" and narrowly escaped with his life. His main focus in later life was reconciling the scientific and spiritual worlds, and he pursued divine knowledge and angelic communications at great personal cost.

Woolley gives us a fascinating, balanced account of Dee's mystical exploration, a quest quite foreign to our modern scientific world. He suggests it was a reaction to the tumultuous times in which Dee lived. For the first time in 1,000 years humanity was no longer at the centre of the universe, and Dee hoped that Maths would restore the divine order.

One of the central points of the book is its description of the interplay of science, philosophy, religion and magic that defined Dee's life. Like its subject, the book is scholarly, with numerous footnotes and references. However, these are not intrusive, and it is well written and very readable. It presents a fascinating account of Dee's life - both his personal life, and his role as one of the early scientific thinkers. It is not only Dee himself who is intriguing, but also the light cast on historical figures such as Queens Mary and Elizabeth and the early scientific community of mathematicians, geographers, philosophers and cranks who were beginning to discover the scientific reality that transformed their world into our modern one.