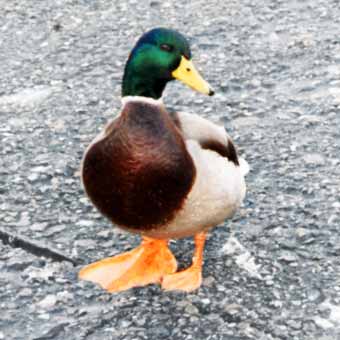 Most of us manage perfectly happily with one foot longer than the other, but it appears that, for birds, such asymmetries can be an omen of extinction. Conservationists, who are always on the lookout for signs that animal populations are becoming vulnerable to extinction, now have a new early warning signal, thanks to researchers at the University of Antwerp.

Luc Lens and his collegues investigated whether high levels of asymmetry in bird populations could be used to predict vulnerability to extinction. They compared the length of the left and right foot bones of 260 Taita Thrush over a period of 3 years. Fewer than 1,400 of the critically endangered Taita Thrush survive in just three remnants of the Taita Hills forest in southeastern Kenya - the highly degraded Chawai, the moderately degraded Ngangao and the virtually undegraded Mbololo forest fragment.

The mathematical concept of symmetry has many applications, such as in chemistry and biology. Symmetry has been thought for some time to be an important indicator of good health and survival prospects - even for humans. People with more symmetric faces are more generally found attractive, and so have a better chance of success in reproduction and genetic survival. Also, severe asymmetry can indicate genetic problems, or that the individual suffered from infections that affected its development - suggesting to potential mates that they should look elsewhere.

Similarly, it appears that levels of symmetry for a whole population can predict the survival prospects for the group. In order for fluctuating asymmetry (FA) to be a useful indicator of population decline, it is vital that it becomes apparent in populations before irreversible damage is done. The research, reported in the journal Conservation Biology, gives the first unambiguous evidence that this is the case. Using sophisticated mathematical modelling of the populations and statistical techniques to remove error and experimental bias, the researchers discovered that levels of asymmetry became higher the more degraded the forest fragment was. Compared to the population in the undisturbed Mbololo fragment, the asymmetry was 2.5 times higher for the population in the moderately disturbed Ngangao and 8 times higher in the highly disturbed Chawai. Meanwhile, the survival rates were only affected for the Taita Thrush population in Chawai, suggesting that asymmetry does appear before significant damage is done to the population.

Using asymmetry as an early danger sign will have a real impact for conservation programs everywhere. Not only is it much easier to collect data on asymmetry than on other measures of population fitness, but the measurement and analysis requires no expensive equipment and does not damage the birds or their habitat. Hopefully, if we heed such warnings we might act in time to save the Taita Thrush and other endangered species.