Ripped off at the beach

Roughly 10,000 surf rescues and 50 deaths occur each year on Australian beaches, with a large proportion of these due to rips dragging unsuspecting swimmers away from the shore. So new research, identifying an elusive type of rip and explaining how rips are generated, is good news for scientists and swimmers alike. 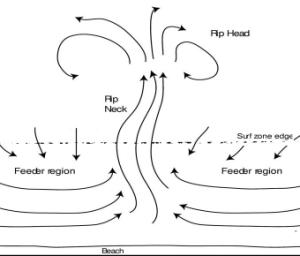 There are three basic regions in the structure of a rip: the feeder region, rip neck and rip head.

A rip occurs when water is drawn away from the beach in a narrow fast-flowing channel, sometimes reaching well out from the shore. Topographic rips occur in fairly fixed positions, and are due to the shape of the sea bed and the presence of sand bars, headlands or groynes. But transient or flash rips occur unexpectedly where these features are not present.

Topographic rips have been well documented and researched, but until recently no-one had even been able to measure a flash rip, let alone understand how one might be generated. But in a recently published paper, David Johnson and Charitha Pattiaratchi from the University of Western Australia described how they were able, for the first time, to detect, measure and explain flash rips.

Previous research had focused on topographic rip currents because the existing measurement techniques involved positioning instruments in a fixed place in the surf, so scientists could only measure rips which occurred in predictable fixed positions. To have a chance of detecting flash rips, Johnson and Pattiaratchi developed new instruments, called surf zone drifters, that could float freely in the water and be caught by a rip wherever it occurred. They used this new technique alongside traditional fixed point methods on Leighton beach, a relatively flat beach in Perth with none of the features that generate topographic rips, and were able to record flash rips for the first time. 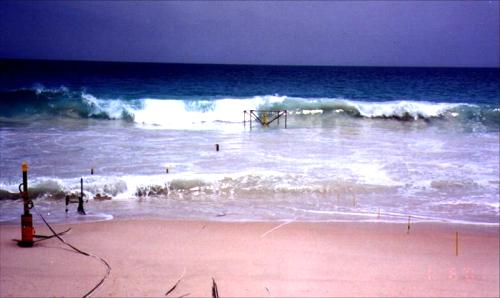 Taking the measurements on Leighton Beach

Confirming that these rip systems existed in nature was only the first step, said Pattiaratchi. He and Johnson applied their new data to the numerical models of beach currents to try to understand how these rips were being generated. By decomposing the current flow into different parts, they were able to numerically solve a modified form of the Navier-Stokes equations describing the currents in the surf zone of flat beaches such as Leighton (read more about the Navier-Stokes equations in How maths can make you rich and famous from Issue 25 of Plus). They found that the total nearshore current was made up of a low-frequency part - which described changes occurring over several wave cycles rather than instantaneously - and a rotational part. "By decomposing the flow into those two components, we could look at how these things are formed," said Pattiaratchi. "And we found that mainly it's the rotational flow which creates these rip systems."

The total current is equal to the mean current (the low-frequency part) plus the rotational flow.

When two different waves, rather than one uniform wave, hit the beach, there is a gradient of velocity in the water between the two waves, and vortices or rotating flows are created (as shown in the image on the left). As these vortices move offshore into deeper water they rotate faster and faster, following the same principle of conservation of vorticity as ice skaters do when they spin faster by increasing their height. "The vortices start off slow, like a skater in a squashed position, but when they go offshore the depth becomes greater so they rotate faster", Pattiaratchi said (read more about conservation of vorticity). But that then has the effect of bringing more water offshore - and so a rip is formed.

Because of the random nature of the wave field, these rips could form any time anywhere, said Pattiaratchi. But once one occurs, the rip's flow moves the ocean sediment creating a positive feedback mechanism, and further flash rips are more likely to reoccur in this same place.

The best way to escape a rip is to swim across the current rather than against it, until you are out of the rip current and can swim back to the shore. The experience of being pulled away from the shore can frighten even the most experienced swimmer, but hopefully with Johnson and Pattiaratchi's new understanding of flash rips and new techniques to study them, fewer of us will fall into these ocean traps.