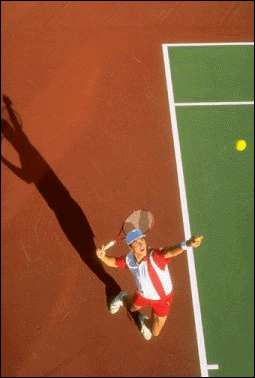 You play tennis like a champion compared with the best of robots, if you play tennis at all. This is because both you and Tim Henman can solve the complex equations of ball and racket quickly and instinctively, without working through the mathematics. So sending Britain's only hope of winning Wimbledon to maths classes isn't likely to help him win next year. But off the court, new research taking time to look more closely at the equations may help us to develop better robotics for artificial limbs.

The research by Dagmar Sternad of Pennsylvania State University, and colleagues, reveals that you exploit certain very special conditions when bouncing a tennis ball up and down on your racket. These special conditions mean that small errors in your judgement will not make you lose control.

The equations of bouncing a ball on a racket are chaotic. Even very small changes in the racket's speed and acceleration can have a large effect on the position of the ball only a few bounces later. Since it is impossible to measure, far less control, the speed or acceleration to within such a tiny range, mathematicians can't predict the future path of the ball under most circumstances.

For the same reason, today's robots can't control a ball for more than a few bounces. This is because they are programmed to make a guess and continually improve upon that guess after every bounce, using sensors to check their performance. This is the best they can do if they are to rely on predicting the path of the ball in order to control it. However, the presence of chaos ensures that small errors in their measurements lead to large errors in their predictions. This is what causes them to lose control of the ball. 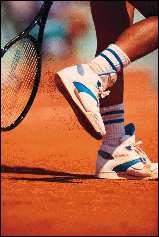 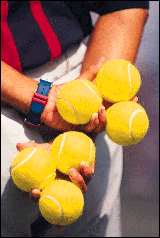 So how do humans do it? Well, hidden inside the equations of many chaotic systems are stable attractors: special sets of conditions where small differences won't change the result drastically. In other words, if you can make your behaviour fall into this particular class, the system will no longer be sensitive to tiny differences in how you hit the ball, so it is not necessary to judge so precisely how the ball is moving.

Using a mathematical technique known as Lyapunov stability analysis, which watches how errors change over time, Sternad found that for a ball to bounce in this nice way, you need to be slowing the racket down just as it hits the ball. By carefully observing people as they bounced balls in the real world she confirmed that they do just that. Hitting the ball slightly too hard on one bounce won't mean that a few bounces later you send the ball into orbit, since you are hitting the ball in this Lyapunov stable way. So you can control the ball without making calculations about the ball at every bounce. It is good enough to have only an approximate judgement of the right speed to hit the ball at.

Sternad's approach may be used to look for stable attractors in other activities. And by identifying the attractors robots may be able to home in on them in the same way that humans can. Sternad believes that this will greatly improve robotic technology, which, it is hoped, will provide people who have lost limbs with effective artificial replacements so that they might be able to play tennis and perform other tasks just as they used to.