'The science of the Hitchhiker's Guide' 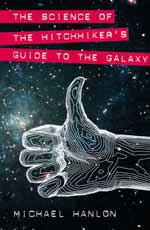 The science of the Hitchhiker's Guide to the Galaxy

The Science of the Hitchhiker's Guide to the Galaxy is divided into themed chapters, each dealing with an issue raised in Douglas Adams' original "trilogy in five parts". The Vogons trigger a discussion on the current search for extraterrestrial intelligence and why we haven't seen any yet, Deep Thought prompts an explanation of artificial intelligence and chess-playing computers (if this interests you see the Plus articles Games people play and Practice makes perfect), and the Babel Fish introduces the problems encountered with computer translation software and the possibility of a universal language.

A mention of the Restaurant at the End of the Universe and the Big Bang Burger Bar leads into a review of modern cosmology and the fate of the Earth. Here Hanlon explains how the mathematical theories needed to explain the Universe have become steadily more impenetrable: the Newtonian description can be understood at A-level, but modern superstring theories involving M-branes and Calabi-Yau manifolds are utterly incomprehensible to all but a tiny group of mathematicians.

The section about the Heart of Gold and its Infinite Improbability Drive is perhaps of most interest to mathematicians. This sparks a discussion on probability and the general public's perception of chance and what is an acceptable risk - an important area when considering the relative risks of smoking, binge drinking and train disasters. The book is also absolutely littered with astounding facts. For instance, Einstein's relativity is not solely the preserve of future starship captains travelling close to the speed of light: the real-life Russian cosmonauts returning to Earth after a year in orbit had gained full four seconds due to time dilation (for more on this subject, read the article What's so special about special relativity? in this issue of Plus).

Occasionally the links back to items in the HHGTTG are tangential at best, with Hanlon seemingly trying to justify a digression he is interested in writing about. But he appears to have missed a trick entirely in the section describing the Anthropic Principle. The section discusses the fact that the universe around us is apparently fine-tuned to allow the existence of life, a phenomenon that has led some people to believe that our universe was in fact designed to have us in it. One of the wittiest metaphors illustrating this argument comes from Douglas Adams himself, describing a puddle's thoughts on the hollow it finds itself in, but Hanlon omits to quote it. In Adams' own words:

"It's rather like a puddle waking up one morning - I know they don't normally do this, but allow me, I'm a science fiction writer - A puddle wakes up one morning and thinks: 'This is a very interesting world I find myself in. It fits me very neatly. In fact it fits me so neatly... I mean really precise isn't it... It must have been made to have me in it.'"

Hanlon has a fine sense of humour, and throughout the book has tried to emulate Adams' distinctive style of writing. In many places this works well and the scientific detail blends in perfectly. In the discussion about what would happen if time-travel were possible and you could journey back to tell someone of a future event, Hanlon creates the enchanting image of a young Einstein running from the room with his hands clamped over his ears shouting "la-la-la". I think that the late Adams would be proud of this book that he never got round to writing himself. For example, the following paragraph describes the world's fastest supercomputer, BlueGene/L:

BlueGene/L models the safety and efficacy of America's nuclear arsenal. This has become something of the career of choice for the world's fastest computers once it was realised that actually exploding atomic bombs above or below ground was (a) very dangerous, (b) gets you into trouble with pesky environmentalists and (c) violates international treaties anyway.

Even die-hard fans of the HHGTTG series (in any of its radio, book, TV, computer game, stage production, or film incarnations) will be satisfied by Hanlon's discussion on the actual plausibility of events conjured up by Douglas Adam's fertile imagination. Hanlon has produced a flowing account, and difficult concepts are introduced as gently as slipping into a nice warm bath. However, if you have read any of the

similar popular science books of the last few years then it is unlikely that you will encounter a great deal of original material in this one.

Lewis Dartnell read Biological Sciences at Queen's College, Oxford. He is now on a four-year combined MRes-PhD program in Modelling Biological Complexity at University College London's Centre for multidisciplinary science, CoMPLEX. He completed the MRes last year, and is now researching for a PhD in the field of astrobiology. He is using computer models of the magnetic fields on Mars to predict radiation levels, and whether alien life, or even future human explorers, could possibly be surviving near the surface. If you're interested in this subject, read the interview with Paul Davies in this issue.
Tweets by plusmathsorg