Inspired by the spirit of Ramanujan 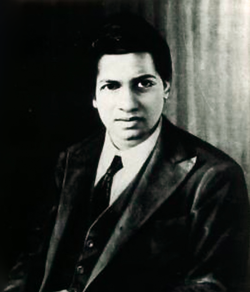 Srinivasa Ramanujan (1887 - 1920) was a mathematical genius whose almost miraculous insight was decades ahead of the times. The mathematics he knew before he came to the University of Cambridge in 1914 he had largely taught himself — without the help of mentors, research groups or extensive libraries. You might have learnt about his inspiring, but also tragic, story in the film The man who knew infinity.

To celebrate Ramanujan's legacy and to benefit talented people all over the world, the mathematician Ken Ono, who was an advisor and associate producer on The man who knew infinity, has helped set up the Spirit of Ramanujan project. It aims to give emerging engineers, mathematicians and scientists a chance to fulfil their potential, particularly those who, like Ramanujan, lack traditional institutional support.

"Ramanujan could have been lost," says Ono. "He was untrained, he was an amateur. From the South of India he wrote a letter to Cambridge." It was this letter which enabled Ramanujan to practice his mathematics with the best mathematicians around at the time and become recognised on the world stage. "The idea [of the spirit of Ramanujan] is that we would like young people form all over the world to write that letter, to apply for this programme, and then maybe we can help provide the financial backing that makes it possible to participate where they otherwise might not have the chance. The programme has already existed for two years. We've given grants to kids in India, Egypt, Kenya, the US, all over the world." The project is funded by the Templeton World Charity Foundation.

Successful applicants receive up to $5,000 to fund participation in research programmes, or individual research with an approved sponsor. People of all ages are welcome to apply, though most of the grants go to young people between 12 and 18 years of age. Awards will be made on a rolling basis (until May 30, 2019), but all completed applications received by December 31, 2018 will be given full consideration.

If you think the spirit of Ramanujan project is for you, then why not apply? You can find all the necessary information on the project website.

Permalink Submitted by mohansingh on March 13, 2019

It is being said that Maths is the mother of Science. And Ramanujan was a mathematical genius. Here is some important notes of Maths 12th and important questions.