There may have been times when you wished that your maths or physics textbook would disappear, but you would have felt differently if it was a rare copy of one of the world's greatest scientific works. A first edition of Newton's Philosophiae Naturalis Principia Mathematica, (Mathematical Principles of Natural Philosophy), one of only 200 copies still in existence, was stolen by a reader from the Russian National Library on November 6.

Newton's Principia was first published in 1687 and contains his revolutionary work on mechanics and cosmology. In it he states the three laws of motion known to all secondary school science students, and develops the universal law of gravitation. Using this mathematics he was able to explain phenomena such as eccentricities in the orbits of comets and the motion of the Moon, and the variation in the tides. Principia represented the culmination of the Scientific Revolution of the 16th and 17th centuries. 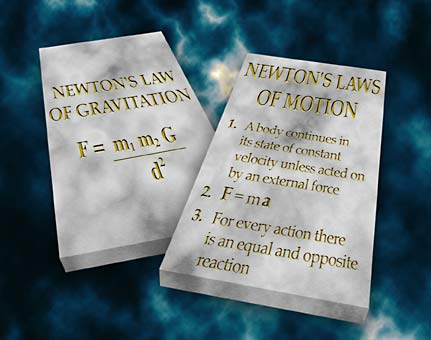 The theft is now being investigated, but it is possible that it was stolen to order - there has been a recent spate of thefts of rare scientific works from European libraries and museums. On the open market a copy of Principia would sell for over £200,000, but its price on the black market may be even higher.

You can be sure if the reader ever returns this overdue book, they will face more than a hefty library fine.

Well not quite ... Newton was in the running to be voted the Greatest Briton of all time on the BBC's series - Great Britons. As he was the only mathematician in the race, Plus was naturally barracking for Newton, but sadly Winston Churchill won. Still, Newton made it into the top ten, along with Darwin, Shakespeare and, er, Princess Diana...