'Sustainable energy — without the hot air' 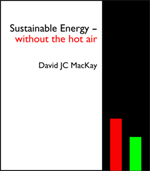 Sustainable energy - without the hot air

A lot is written about energy efficiency and renewable energy, but do the sums add up? We're used to reading seemingly impressive statements such as, "by using renewables ... the UK could cut its greenhouse gas emissions by nearly 20% within 12 years" (from BBC News), but these numbers are often presented without calculations or supporting evidence.

David MacKay's important and engagingly written book aims to put real estimates against such claims and to evaluate the case for sustainable energy options. His aim is to take the emotive arguments out of the equation and to simply ask if the sums add up.

The main premise of the book is that we in the UK should cut our use of fossil fuels, and the book looks at what action we need to take to achieve that. The motivation for doing so is not just the role that fossil fuels play in global warming, but also the fact that fossil fuels are a finite energy source, which leaves us potentially held to ransom by unfriendly foreign powers or vulnerable to large price rises as the resources deplete.

Assuming that we do want to reduce fossil fuel use, MacKay looks at two key questions: how much energy does the UK currently use, and how much can renewable energy sources plausibly deliver if they were fully exploited.

Instead of presenting his calculations in abstractly large numbers that are hard to work with, MacKay talks in terms of "kilowatt-hours per day per person", making it easy for the layman to make the connection between the various energy uses and sources, and how they relate to everyday life. For example, we learn that the average Briton uses 125kWh per day (kWh/d) and that the average American uses 250kwh/d. Thus, when MacKay calculates that the theoretical maximum that inland wind power can deliver to the UK is only 20kWh/d per person, we begin to see the true challenge of using renewables as a source of energy.

In estimating energy usage and generation, MacKay uses ball park figures or best guesses in order not to get bogged down in detail. For example, the theoretical maximum power that shallow sea wind turbines could produce is obtained by calculating the amount of off-shore space available (a 4km strip around the entire 3000km of UK coastline) and how much power that area of turbines could produce. That the resulting figure of 20kWh/d per person is rather low shows the scale of the investment required to achieve even this low contribution, and that just saying "wind power is good" is not enough.

The first half of the book adds up the current energy usage of the UK and the theoretical maximum that could be provided by renewables. When adding up usage the major categories MacKay investigates are transport, heating/cooling, lighting, information systems, gadgets, food and manufacturing. On the renewables side, he adds up wind, solar (photovoltaic, thermal, biomass), hydroelectric, wave, tide, geo-thermal, and nuclear (with the caveat that nuclear is not technically a renewable, but reduces CO2 emissions).

The conclusion of the first half of the book — that we currently use more energy than can even be theoretically generated by renewables — is sobering. However, MacKay isn't content with simply painting a depressing picture; the second half of the book contains concrete recommendations about the best balance of wind, nuclear, solar, etc, to provide for our needs, as well as the most practical routes to cutting energy use. Both will be vital if we are to seriously tackle the issue.

Although none of the solutions presented are easy, MacKay does come to some interesting and surprising conclusions. For example, the case for electric cars is much stronger than I had previously thought, and some of the best things an individual can do right now are to simply turn down their heating several degrees (save 20kWh/d per person) and go vegetarian (save 10kWh/d per person). As well as not flying, of course — that would save a whopping 35kWh/d per person.

By putting reasonable estimates on our energy use and energy sources, MacKay brings a rational approach to a subject that is otherwise too often swamped by emotion or littered with cherry-picked data that sound good in isolation but lack context and often, sadly, accuracy. MacKay also enjoys putting paid to complacent myths, for example that unplugging mobile phone chargers helps save the planet — as he puts it: "lots of little actions...achieve lots of very little".

The success of this approach is surely reflected by David MacKay's appointment in September 2009 to the position of Chief Scientific Advisor to the Department of Energy and Climate Change. Let's hope that they listen to his timely and sober analyses of the situation.

This book, along with new data and findings, is also freely available online.

Oli Freke is a member of the electropop group Cassette Electrik, who supported The Human League on their Dare 2007 tour. His new side project On Rails is for more experimental work, of which his piece Sine Language, explored in a Plus article, is the first, composed for GeekPop 2009.