'The tiger that isn't' 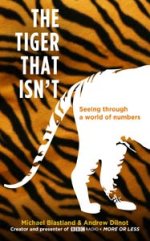 The tiger that isn't: seeing through a world of numbers

by Michael Blastland and Andrew Dilnot

Mathematics is the language of science. Clear, simple, fundamental.

Perhaps because of this purity, numbers can be the slaves of spin-doctors, politicians and an unscrupulous media. We are unusually vulnerable to the power of numbers and patterns. A mobile phone tower is built in a country town, a few people report health problems and immediately we associate the two with each other. But is there really a connection, or are we simply susceptible to spotting patterns even when they don't exist?

In their new book, The tiger that isn't, Michael Blastland and Andrew Dilnot, the team that brought us the BBC radio programme More or Less, take on those numbers that all too often fool and bamboozle us. The title of the book comes from the idea that humans have evolved to be very good at picking out patterns, but will often be wrong about what those patterns mean — we are good at recognising, yet vulnerable to misinterpreting, numbers. The ability of early humans to comprehend that the patterns of light in the bushes could be tiger stripes was key to their early survival. It's better to run, even if you are wrong, than to deliberate and get eaten. As a result, we're often wrong and at risk of being mislead.

The tiger that isn't is easy to read, informative, humorous and scientific. Far from being patronising or condescending, the arguments are fascinating and the examples accessible and relevant. The book shows how numbers, when taken out of context or presented without sufficient information, can be made to back up just about any sensationalist argument that politicians or the media might care to make, but also that a closer look can quickly unravel a faulty argument.

Take for example the alleged huge increase in cancer risk to women who drink alcohol every day, presented in a 2002 BBC news story. A look at the actual figures reveals that the risk increase isn't 6%, but a mere 0.5%, and you would have to drink a lot of alcohol to achieve this. Similarly, it's easy to see that the average number of legs a person has is less than two (it only takes one person to be born with 1 leg to bring down the average), showing us that we should be very careful when using averages to represent a sample.

The authors are very good at turning difficult problems around and allowing us to understand them. Each chapter starts with a concrete example of how numbers can be misused or misinterpreted, with the scenario clearly deconstructed and explained in an easy-to-understand manner. As each chapter develops, more difficult concepts are tackled in a way that is accessible even to those to whom maths is a "cobwebbed mystery". The great strength of the book is the personal nature of the examples. There are no abstract concepts, no xs and ys taking the place of unknown numbers — it is far easier to conceive of a group of 1000 women in which a small number have breast cancer, than a faceless percentage. As a result, the book is not only for mathematicians, but for everyone who reads the newspaper or watches the news. Journalists would be advised to read it closely and maths or stats teachers will find a wealth of real-life examples for direct use in the classroom.

Mathematics is one of those subjects that people don't mind admitting they do not understand. Whilst at a dinner party, you probably wouldn't admit that you couldn't read, and perhaps you wouldn't even admit you couldn't drive. But admitting "Oh, I can't do maths" seems perfectly socially acceptable. The Tiger that isn't shows that a little maths goes a long way towards seeing through the web of numbers and percentages we see around us towards the real facts of the story. It shows that maths is not simply a subject of academic value and that it is indeed not to difficult for us all to have a go at. The book does not set out to "pepper its readers with unfamiliar facts"; instead, it shows how much they already know, and how to use that knowledge incisively. I haven't watched a news report since without wondering whether the £1 million being spent on some facet of education really is very much at all. It'll make you think every time you see maths in the media. Next time you're about to admit that you couldn't care less about maths at a dinner party, you may well start a conversation about numbers.

Find out more about The tiger that isn't in Blastland and Dilnot's article in this issue of Plus.

Marc West is Assistant Editor of Plus.
Tweets by plusmathsorg