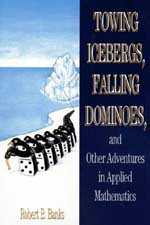 Towing icebergs, falling dominoes and other adventures in applied mathematics

We live in a world that obeys many physical laws, and that can be modelled by a variety of mathematics. It is surprising what a variety of problems can be described by very similar models. Robert B. Banks does not concentrate on the most common examples of applied mathematics, but instead covers a fascinating selection of topics as varied as the US national debt, the Eiffel Tower, and the flight of golf balls.

I constantly found snippets of interesting trivia relating to the world around me. The section on the rise and fall of NFL teams could, for the soccer fan, be applied equally to Premiership League football teams. The speed at which dominoes fall mostly depends on how far apart they are, and the speed of human runners for various distances can be modelled in a similar way.

We are not just treated to the usual sterile models of "ignoring air resistance", "assuming there is no friction" and other common unrealistic assumptions of many textbooks. Yes, there are assumptions in the models used, but they do not lead to unrealistic or contrived scenarios. More commonly, a basic problem is described, then additional effects are accounted for.

It is important to know that this book uses mathematics to solve problems in engineering, physics, economics and the like. So it is assumed you already know the mathematics - you will need a reasonably good understanding of calculus, and if you know about multivariable calculus, that would be a bonus. A first-year undergraduate should have no trouble with the equations, and a student in the final year of secondary school could expect the mathematics to be challenging but mostly within reach.

"Towing icebergs" would be appreciated by anyone who wished to study in depth any of the topics covered, with problems, a large list of references, and even suggestions for "term projects". For teachers, it would provide a wealth of ideas and real-world examples that show the purpose of studying maths.

Oh, and towing an iceberg from Antarctica to California is within our abilities, but not the most practical solution to fresh water shortages!

Anita Barnes is in the third year of her PhD studies at Cambridge University. Her work is on numerical General Relativity, supervised by Dr John Stewart. Before coming to Cambridge, she earned a BSc and an MSc in mathematics and physics from the University of Waikato, New Zealand.
Tweets by plusmathsorg