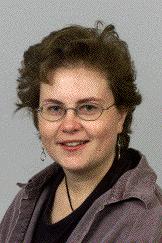 For the first time in its 120 year history, the Adams prize - one of the UK's most prestigious mathematical awards - has gone to a woman. Dr Susan Howson, 29, a Royal Society Dorothy Hodgkin Research Fellow and lecturer at Nottingham University, won the prize for her research on elliptic curves.

The Adams Prize is awarded by Cambridge University to a young, UK-based researcher doing first class international research in mathematics. It commemorates John Couch Adams' 1845 prediction on mathematical grounds of the existence of the planet Neptune. Previous winners of the £12,000 prize include Stephen Hawking and Roger Penrose.

Each year, the prize is awarded to someone working in a different area - this year was the turn of Number Theory, one of the largest and oldest fields of maths. As you would think, Number Theory concerns itself with the properties of numbers - usually whole numbers or (rational) fractions.

In general, curves are classified by their genus - the number of "holes" in the surface formed by the set of solutions to their equations. Genus 0 (0-holed) curves are comparatively simple and well understood. These curves can be represented by quadratic equations. In contrast, genus 1 - elliptic - curves are a special case, with a particularly rich theory and structure.

The study of elliptic curves is connected to many other important areas of mathematics and its applications. To name a few, it turns out to be related to topology and to cryptography. It was work he did on elliptic curves that finally allowed Andrew Wiles to prove Fermat's Last Theorem.

So what does Dr Howson enjoy about working in such an abstract field of mathematics? She says that she likes the fact that "it's not just about doing computation, but about logical thought processes. The problem-solving is conceptual and visual." She is aware that this is not the image people have of maths. "People tend to say things like 'haven't all the sums been done by now?' When you use words like 'beauty' about mathematics, you're making people aware that pure maths can be more like philosophy or an arts subject than the other sciences it tends to get linked with."

She is well aware that the publicity for her win has come solely because she's a woman. How does she feel about that? "Sort of strange", she says. "On the other hand, it's probably a good thing to have some media interest, because maths in general isn't all that high-profile."

We asked her if she felt things were changing for women in mathematics. She is sure they are. "If you look down through the ranks, 40% of undergraduates are female." She feels that, given time, that change will filter through to the highest levels. "I don't think there's any active force preventing women from progressing in mathematics."

And does she think that winning this prize will make a difference to young women considering studying maths? "I wouldn't dream of saying that! It's more to do with girls making that choice themselves."