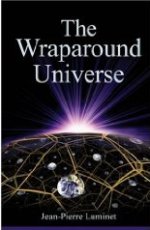 Jean-Pierre Luminet's The wraparound universe is a fascinating tour of modern models of the Universe, with particular emphasis on Luminet's own research on the topology of the Universe. Topology is the study of shapes, but with the idea of distance thrown away; a bracelet is topologically equivalent to a coffee mug because we can remould the mug as long as we maintain the hole formed by the handle, whereas we could never make a football because the hole would always remain. As Luminet suggests, the topology of the Universe is one of its important properties, for it determines whether space is finite or infinite.

Assuming that the Universe has no boundaries, the first thought may be that it is the curvature of space that determines if it is finite: the surface of a sphere, for example, is unbounded yet finite. The curvature of the Universe could either be positive (hyper-spherical), negative (hyperbolic, for example saddle-shaped) or flat, but only the positive, spherical case implies that the topology is finite. The other two cases allow for both a finite and an infinite Universe.

This may seem counter-intuitive, for how can a flat unbounded Universe be finite? Luminet deals with exactly these sorts of subtleties when modelling the Universe. It turns out that all you need is the correct topological construct. Imagine tiling a plane with a repeating pattern of identical squares. Now look at all the points that make up your favourite square and require that each is identical to the corresponding point in all the other squares: the mid-points of all squares are actually "the same" point, the top edge of each square is identified to its bottom edge, and the left-hand edge to the right-hand edge. Now suppose you live in this "universe" and want to discover if it is finite. If you shine a (bright!) torch out the top of a tile, the light arrives in the tile above from below. But since this tile is identical to the one below (you exist in this tile too!), this is the same as the light arriving back in the original tile from the bottom. Light travelling through this two-dimensional universe (represented by a line across your tiling) will eventually arrive back at its starting point, having travelled a finite distance. Hence this flat unbounded Universe is finite. The tiling is just a representation of the topology of this Universe; different tiles are in fact the same (wraparound!) Universe.

Luminet proposes a similar representation of our own Universe, but with the tiling now composed of a repeating pattern of (positively curved) dodecahedrons. He introduces us to many fascinating consequences of such a Universe. Not least, the fact that, with this topology, two apparently different stars in the night sky could actually be the same star, but with the light having taken different routes to reach us. Furthermore, the actual Universe would be 120 times smaller than the equivalent hyper-spherical one. Luminet explains with great authority how these properties can be systemically tested for by current and future observations.

Luminet's dodecahedral Universe is multiply connected, which is to say you can take topologically distinct paths that arrive back at the same point. The wraparound universe is quite literally multiply connected: it is made up of semi-independent chapters allowing the reader to find their own path through the book. Although some readers may find this useful, particularly those who find some chapters daunting (some of the ideas, particularly the topological ones are quite subtle) others may find it frustrating; it disrupts the flow of the book, which detracts from the excellent story Luminet tells, and necessarily leads to some repetition.

Although the book serves as a good introduction to current ideas in cosmology, it is at its best when Luminet discusses his own research. The passages devoted to the evolution of his own ideas and the course of his own career are particularly engaging — the book would have benefited from more space devoted to these.

The wraparound Universe should appeal to anybody with an appetite for modern cosmology. However, the ideas come thick and fast, so some basic familiarity with at least some of these concepts will add to the enjoyment.