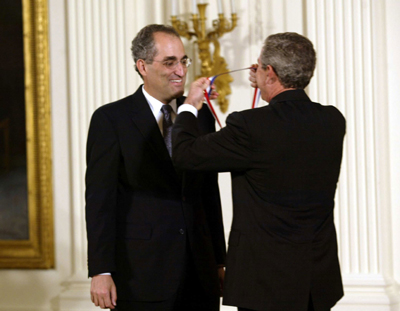 The Crafoord Prize, one of the world's largest science prizes and worth $500,000, is awarded annually by the Royal Swedish Academy of Sciences. Established in 1980 by Holger and Anna-Greta Crafoord, the prize "is intended to promote international basic research in the disciplines of Astronomy and Mathematics; Geosciences; Biosciences, with particular emphasis on ecology and Polyarthritis (rheumatoid arthritis)," — all fields not covered by the Nobel prize. Holger Crafoord suffered severely from rheumatoid arthritis near the end of his life and hence the specific prize for research in the area.

The 2008 version was awarded for cross-disciplinary mathematics and significant discoveries regarding the fundamental laws of nature and the early Universe. Kontsevich, from the Institut des Hautes Études Scientifiques, France, and Witten, from the Institute for Advanced Study, Princeton, USA, were jointly awarded half the prize for their work on the mathematics of string theory. The Academy commended "their important contributions to mathematics inspired by modern theoretical physics."

Sunyaev, from the Space Research Institute of the Russian Academy of Sciences, Russia, and the Max Planck Institute for Astrophysics, Germany, was awarded the other half of the prize for his contributions to high-energy astrophysics and cosmology, in particular his study of black holes, neutron stars and the cosmic background radiation.

Witten is one of the leading figures in the development of string theory, and has had a highly successful mathematical career that includes the 1990 Fields Medal, the 2000 Nemmers Prize and the 2002 National Medal of Science bestowed by the US President. He was one of Time magazine's "100 Most Influential People" in 2004, and in 2006 was inducted into the Pontifical Academy of Sciences by Pope Benedict XVI.

String theory is a mathematical approach to theoretical physics which describes the elementary particles not as zero-dimensional point particles, but as vibrating strings with length near the Planck Length (10-35m). While it was originally devised to model the strong nuclear force, it is thought to hold potential for unifying gravity with the other fundamental forces through quantum gravity. It may also be the basis of a "theory of everything" combining general relativity with quantum mechanics. You can read more about String Theory in Plus articles String theory: From Newton to Einstein and beyond and Tying it all up. Also see our archive.

Various string theories represent spacetime as having 10, 11 or 26 dimensions, depending on the particular theory. The extra dimensions are thought to be extremely small and have yet to be detected by experiment. However, string theory predicts that with enough energy, the extra dimensions will be experimentally observable. Witten adapted the mathematics of particle physics to develop new ways of tackling the challenges presented by these extra dimensions and what might happen when such strings collide.

Whilst Witten's approach was largely based on intuition, Kontsevich showed that it was mathematically sound. Kontsevich was awarded the Fields Medal in 1998, and the Royal Swedish Academy of Sciences described him as "one of the most original mathematicians of our day."

Mathematically, the work of Witten and Kontsevich concerns knot theory and the classification of geometric objects. Witten developed his model by borrowing methods from particle physics. In quantum physics, quantum field theory is used to describe elementary particles. When particles collide in particle accelerators, the probabilities of various results can be calculated using quantum field theory to combine all the ways in which the particles can move and change into new particles following the collision. A Feynman diagram, a figure devised by Nobel Laureate Richard Feynman to show how particles interact, can be used to display the results.

Witten used this approach to model knots — see Plus article Why knot: knots, molecules and stick numbers. By envisaging a knotted rope as the path of a particle following a collision, Witten devised a mathematical expression that differentiates between different kinds of knots. Kontsevich, for his part, proved that Witten's intuition in using the models of particle physics made good mathematical sense.

Their work also concerned other geometric surfaces. Consider, for example, a closed two-dimensional surface. If you regard two surfaces as being the same if they can be deformed into one another without tearing, you'll find that each surface is characterised uniquely by its number of holes — it's either a bun with no hole, a doughnut with one hole, etc. Keeping track of the geometry becomes increasingly difficult as the number of dimensions increases. This problem is related to the Poincaré conjecture — see numerous Plus articles. Witten replaced the surfaces with nets of Feynman diagrams of the same shape, and again by modelling how particles in such a net move, found mathematical insights into classifying geometric shapes. His work was confirmed by Kontsevich.

Mirror Symmetry is one particular characteristic of multi-dimensional surfaces that Witten and Kontsevich studied. By using the processes of particle physics, they were able to show how the extra dimensions of strings can sometimes appear different from each other geometrically, but can still produce the same physics in our ordinary four-dimensional space-time.

Witten is also a pioneer of M-Theory, a proposed master theory that unifies the various versions of string theory that are postulated.

The prize will be presented in Stockholm on the 23rd of April 2008.