All's fair in love and maths 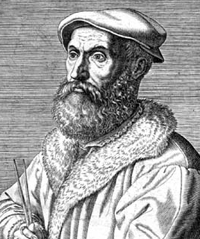 On August 10, 1548, en epic battle ensued in a church in Milan. It wasn't about religion, or even about who said what in the pub the night before, but about maths. The main contenders were Lodovico Ferrari and Niccoló Tartaglia. The object of their battle, which was fought with their minds rather than fists, was an equation. Or rather, a whole family of them.

One of the most famous class of equations are quadratic equations. They have the form

are rational numbers. An example is

The two solutions to this equation are given by the formula

For our example, where

, the formula gives the solutions

By plugging those two numbers in for

in the original equation, you can convince yourself that the formula works.

The question is, is there a similar general solution for cubic equations of the form

In the sixteenth century solving cubic equations became the topic of hot mathematical duels, with mathematical glory, job offers and money up for rewards. People tended to keep their methods secret in order to have an edge in these competitions. For example, the Italian Scipione del Ferro discovered a general formula for solving a depressed cubic — one with no square powers, of the form

Thanks to the use of some tricky substitution of variables and the clever application of the quadratic formula, del Ferro developed a general formula giving a solution for these depressed cubics

For the depressed cubic equation

as a solution. This complicated looking number is in fact

(You can convince yourself of this using a calculator.)

The equation does have two more solutions, which are complex numbers, but once you have found one solution these are easy to find, see below. 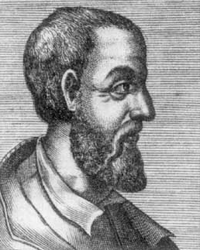 On his deathbed del Ferro passed his formula on to his student, Antonio Fiore, who intended to use it as an ace up his sleeve in a contest against his rival Niccoló Tartaglia. But Tartaglia independently discovered the same method for solving the depressed cubic just in time and proceeded to wipe the floor with del Ferro's student.

The victorious Tartaglia had a fascinating life story apart from his victory in mathematical smack downs. His real name was Niccoló Fontana. A wound inflicted by a French soldier when he was young had left him with disfiguring scars and a stammer, leaving him stuck with the nickname Tartaglia, "the stammerer". His opponent in the battle in Milan church in 1548, Lodovico Ferrari, was fighting on behalf of yet another mathematician, Giralomo Cardano. Tartaglia had divulged his cubic method to Cardano, on the condition he swore a "most solemn oath, by the Sacred Gospels and his word as a gentleman," never to publish it. But when Cardano discovered that del Ferro had independently discovered the solution before Tartaglia he included it in his work, the Ars Magna (meaning "The great art"), published in 1545. Cardano gave both Tartaglia and del Ferro due credit, but Tartaglia was angry about his secret being revealed. The battle in Milan was the culmination of a terrible feud that had ensued as a result.

Cardano did the world a great service with his masterpiece Ars Magna. In it he revealed a method for turning any cubic equation

into a depressed cubic, which could then be solved using del Ferro's solution. This finally tamed the cubic. We won't give you the general solution here because it's pretty complicated. You can look it up here.

As far as Tartaglia was concerned, he lost the battle. Seeing he was nowhere near as good as Ferrari, Tartaglia left Milan ignominiously without completing the contest. His reputation damaged, he eventually lost his university position while Ferrari went on to have a distinguished mathematical career, riding the wave of mathematical glory. Those mathematical competitions were more than just a harmless pastime!

Finding the complex solutions of the cubic

As we saw above, one of the solutions of the depressed cubic

To find the other two, we first factorise the depressed cubic using the term

as complex solutions to our original cubic equation

Rachel Thomas is editor of Plus.

The story was a bit different at least in the words of Tartaglia. The crowd that gathered in Milan was death threatening Tartaglia, who got away just in time...

Ferrari was a servant to Cardano who liked the young boy and instructed him. After he defeated Tartaglia he became rich enough that was later killed by his own sister and brother-in-law for his money....

To get an idea of what was life at the time one could read a recent English translation of Cardano's autobiography originally written in Latin: "The book of my life"