What is an altimeter?

Let's start with a barometer. A barometer gives the atmospheric pressure at its location. An altimeter is just a complicated barometer; if you make an altimeter read zero feet (sorry, air traffic controllers use feet for height - although visibility is in metres and km!), it will give you the atmospheric pressure (pressure) at that position (see alt_zero.jpg). At military airfields, the Met Office take the pressure and, using some complicated formula, work out the pressure on the runway where the aircraft will land (as opposed to one of the other runways). In Q code, this is known as the QFE.

(During the Second World War, a three-letter code, known as the Q code because each element began with the letter Q, was used to transmit radio signals between aircraft and air traffic control in Morse. Some of these codes are still in use today, even though the reason why particular letters were selected is no longer known - if there even was a reason in the first place.)

Going back to our altimeter, if the altimeter sets the QFE, it will read zero feet when it is on the runway; if the aircraft is flying, it will give the height above the landing runway. This QFE is only accurate for the runway at that airfield; for example, if our destination airfield is 300ft higher than our departure airfield, its QFE will be about 10 millibars lower (1 millibar equates to about 30ft and if the airfield is higher, there's less air above it so the pressure is lower).

Now, if you fly on the QNH at 2700ft, you know you'll miss the hill. Incidentally, Graham Hill, the racing driver, was killed when he flew into the side of a hill in cloud; the investigation showed he had the wrong pressure set. 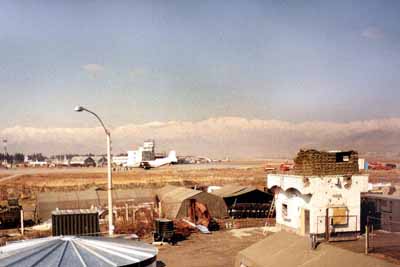 A view of Kabul Airport, taken by Geoff

I work at Lyneham, with aeroplanes flying around on my QFE. Twenty miles up the road is Brize Norton with aeroplanes flying around on their QFE. Lyneham is 513ft above sea level, Brize is 288ft. My job is to make sure aircraft don't fly into other aircraft and so is the Brize controller's. The best way to do this is to talk to each other and agree some plan to ensure my Herc doesn't fly into their Tristar and the easiest way is vertically (I'll fly over their aeroplane, or vice versa). Legally, we have to agree 500ft separation (1000ft if one of the aircraft is not military). Consider the following:

There is roughly 7 millibars difference between pressures, so if Lyneham QFE was 1000, Brize would be 1007. To avoid the above, the controllers would work out equivalent heights and keep it safe. As a rule of thumb, if you wind on pressure (so 1000 goes to 1007), you wind on height, so (mentally) if I changed my QFE to theirs, I would make my aircraft's altimeter read 210ft higher, so to achieve 500ft I would need to climb or they would need to descend - but what about that aeroplane flying to Gloucester at 2500ft on the QNH...?

From a military standpoint, we have to think about a pilot alone in a fast jet with one or more emergencies (or even battle-damage), with enough fuel for one attempt to land in foul weather at an unfamiliar airfield - not having to remember what the altimeter should read when the plane is 200ft above the runway makes one thing fewer for the pilot to worry about.

Nearly there. One last pressure - the Standard Pressure Setting (SPS). Next time you watch the weather, look at the isobar charts. The numbers they give are equivalent to the QNH in that area. If you look again tomorrow, the QNH will have changed. Sometimes (especially in winter) when weather systems come through, pressure changes can be quite rapid, so the atmosphere is a fairly dynamic environment. Now, back to the paper. Look at the Atlantic chart. An isobar is a line of constant pressure (like a contour on a map), so you can see the QNH would be fairly variable on a flight from London to New York. Now, there are no radars over the Atlantic, so separation between aircraft is procedural (You fly at speed X, height Y and be at point A at time Z. Next aircraft, fly at...etc). Thus, by careful sequencing, aircraft miss each other; but what if westbound aircraft are on the London QNH and eastbound on the New York QNH? Pressures change. What if one is on the 1200 London QNH and another the 1400 QNH. What if...?

To guarantee that aircraft are at the right height to miss other aircraft, they need to be on the same pressure. Hence, when an aircraft passes a certain height above sea level (transition altitude), the pilot changes the altimeter to read the SPS (1013 millibars - calculated, no doubt, by a roomful of mathematicians with the History of the World's pressures!) and is now said to be flying on a Flight Level (FL). Each country has differing transition altitudes, chosen to ensure that when flying on the SPS (which, of course, doesn't change with the weather), a pilot won't fly into high ground.

Finally, back to air traffic control. I now have to work out vertical separation between one or more aircraft flying on:

Flight Lieutenant Geoff Wilson is an RAF Air Traffic Controller based at Lyneham. He was interviewed about his career path by Helen Joyce, the editor of Plus, and wrote this explanation of how air traffic controllers use altimeters for Plus.