Tanya Morton has been drawn to three things throughout her career: problem solving, learning new things and educating others. She tells Plus how her role at the mathematical computing software company, MathWorks, combines these three elements perfectly and how mathematical computing has meant her maths makes a real difference in the world. 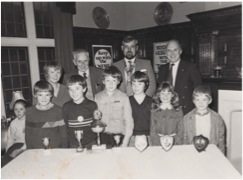 Tanya Morton (second from right in front row) receiving her prize for a chess competition.

Coming from a family of teachers, learning and education have always been an important part of Tanya Morton's life. And it was a teacher from her local high school in Yorkshire who first sparked her interest in mathematics. "I'd always enjoyed problem solving," says Tanya. "I was intrigued by mathematics in highschool by a very good maths teacher, Alan Hampshire, who always encouraged me to do maths at university."

She followed his advice and studied maths at the University of Oxford. "It was challenging but I enjoyed it a lot." When Tanya was halfway through her course she began to contemplate what she wanted to do after university, but none of the obvious jobs that were advertising for maths graduates appealed. "I didn't really know what I wanted to do but I knew I still had more maths within me and I wanted to broaden my horizons and travel. So I thought I'd combine the two and study for a PhD in the US."

When Tanya went to Vanderbilt University to do her PhD she discovered a gap in her undergraduate education: computer programming. "For maths to have a real impact you also need that programming piece to actually implement it and get it used in practice." Her PhD was in approximation theory, using maths and computer science to study a mathematical technique called radial basis functions. 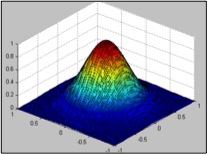 If you want to approximate something, say some experimental data set, with a simpler mathematical description, then approximation theory asks how well can you do it. If you have data across one dimension (e.g. time) you can graph the data points and then join the data points with the smoothest line (the one with the least bumps and therefore the minimum bending energy) that passes through these points. In one dimension this approximation is a cubic curve — a smooth line passing through your points built from different pieces of cubic equations, such as y=x3. If your experimental data is over two dimensions then your approximation will be a surface which passes smoothly through the data. This surface is a radial basis function — the approximation of the two dimensional data as a sum of little hills.

Part of Tanya's PhD focussed on the theory of using radial basis functions over spheres. "For example, the biggest sphere we are all familiar with is the Earth. If you took the temperatures at different places on the Earth you might want to model that as a spherical surface to give you a temperature map." This could be an example where you would use spherical radial basis functions — little mathematical hills across the surface of the sphere — to approximate your data. 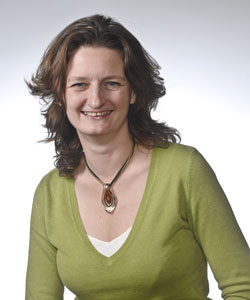 Tanya enjoyed her PhD and in addition to learning more mathematics she also learnt other transferable skills: "You learn the ability to explore open ended questions and the motivation to finish something." Her advisor told her she needed to find a question to solve and it took the first two years to figure out which question she wanted to tackle. This highlighted the gap between real world problem solving and the kind of problem solving that is too often taught in highschool and university. "Real world problems don't come in nicely packaged boxes where you know all the dimensions and it's laid out in a very defined way."

But despite enjoying her PhD Tanya was concerned about the impact her work was having. "I wrote a good thesis but I don't know if more than 20 people actually read it. I got a couple of papers out of it and maybe a few more people read those papers. But ultimately it felt like I put a lot of effort into creating a document that's not really going to shake up the world."

After Tanya had finished her PhD she decided to take up an opportunity at MathWorks, a mathematical computing software company. And it didn't take long for her work to have the impact she was looking for. "On my second day on the job I was taken down to a car manufacturer and plonked down in front of one of our customers who wanted me to apply radial basis functions to fuel economy modelling." Her work on this area is now part of software used by car companies around the world. "That impact is just so much stronger than the impact I would have had if I had stayed in academia." 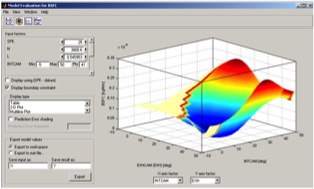 MathWorks has two key products: MATLAB — a mathematical programming environment used for technical computing; and Simulink — software for mathematically modelling systems that vary in time. Tanya joined MathWorks as a project engineer within the consulting team, starting off with a focus on automotive applications. She specialises in MATLAB, using it for data analysis and modelling. "It's very broadly used and that's one of the things I love about it: the diversity of applications of mathematics."

Tanya was involved in a large MATLAB conference at Wembley last year which explored a wide range of applications. "We had a presentation on modelling the effect of weather on the demand for certain food items in supermarkets and how this can help reduce waste and manage the supply chain. There was another presentation on how MATLAB is used in drug discovery and the impact of drugs on the heart. Other sessions included modelling the speed of Formula 1 cars to improve lap time and how MATLAB is used in the finance industry to develop new economic indices."

Some of the recent applications of mathematics are even more surprising: "In the last two months I have talked to customers about pricing holiday packages, supersonic car design, textile machinery design and monitoring nuclear waste reprocessing plants. And my team has worked on hybrid vehicles and how MATLAB was used to understand dance injuries. The diversity is one of the things that keeps me excited and motivated."

Not surprisingly, given the wide range of applications of MATLAB, Tanya and her team use a diverse range of mathematics. "Personally my focus tends to be on statistics and optimisation but my team have a wide breadth and depth of skills, including image processing, signal processing, control design, and generating the computer code that embeds our models into devices such as microprocessors in medical devices. It's a really broad spectrum of things."

MATLAB has been used to help design the shape of BLOODHOUND. Image courtesy curventa

When Tanya started at MathWorks she was part of the consulting team, using MATLAB to solve clients' problems. Now as part of the application engineering team, Tanya talks to clients exploring the problem they're having and then showing them how they can use the software in their organisation to solve it. The role also includes an element of education and teaching, both coaching and developing people within her team and also educating people within client organisations.

"Also we have strong links to our education customers. My team and I work with universities to develop curriculum materials to help prepare students for their future careers. MathWorks also encourages project-based learning through our sponsorship of student competitions. BLOODHOUND in particular is about inspiring the next generation of people to study STEM." (If you are a student you can get involved with one of the student competitions that MathWorks supports: EcoCAR, Formula Student, Cambridge University Eco Racing team and iGem. And you can read more about BLOODHOUND, the suspersonic car on Plus and on Tanya's blog.)

And her mathematical background has even helped Tanya in her role as manager of the Application Engineering team. When she was trying to mix up the seating plan of the sixty, or so, engineers to maximise the amount of technical conversations in the office, her first instinct was to approach the problem mathematically."One approach is to build a big adjacency matrix which says: what are the constraints, who needs to sit next to who? A mathematical approach can help flesh out the requirements in more detail." (You can see how MATLAB can be used to assign offices at the MathWorks site.)

Tanya is also involved in recruitment at MathWorks and has a clear idea of what they are looking for. "We look for people with good maths skills, problem solving skills and good communication skills. One of the aspects of my job I really enjoy is going out to talk to people." It is also very important for potential employees to have good programming skills — something she thinks is vital for any maths graduate. "Maths can really have an impact if you have the programming skills to make that happen."