Changing the face of science 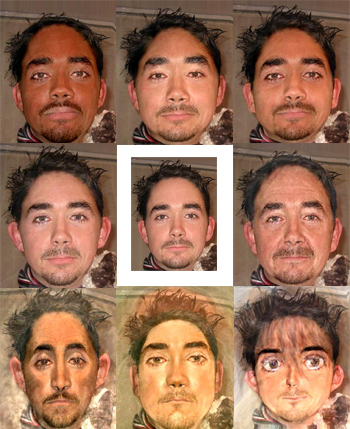 Face of the Future is an EPSRC funded public engagement project, run out of the University of St Andrews, that explores the latest advances in facial computer vision and graphics, and their societal implications. The project has developed a number of interactive exhibits that have toured such places as the Science Museum and the BA Festival of Science in York. They have also produced online demos and a lecture presentation aimed at engaging the public with the technology.

The face transformer manipulates your facial features so that you look older, younger, like a different ethnic group or even a particular art style. The team behind the face transformer collected facial information for people of different ages and races, and created "average faces" for the different groups through a method known as facial prototyping.

Prototyping is a three stage process:

Once the facial prototype has been determined, it is then possible to take another photo and "morph" it towards the prototype. After uploading a photo of yourself and telling the program your age and ethnicity, as well as your eye and mouth position (to normalise your photo against the group to which you belong — in my case, young adult male Caucasians), your facial features are moved to the positions of the facial features of the prototype of the group into which you are morphing. This may then result in a change in eye shape, hair line and general facial shape. Your facial colourings will also become that of the prototype.

It is also possible to come up with hybrids — you can even give yourself chimp characteristics. This process combines 50% of your normalised photo with 50% of the chimp prototype. To calculate an image which is n% image A and 100-n% image B, a set of feature points that are n% between the feature points from image A and image B is calculated. The images are then warped to this intermediary shape and blended together with the weighting specified by n. This is achieved by manipulating the variables

More morphed photos of Marc can be found on flickr, whilst more information on the transformation process can be found at Perception Lab.