Assuming that the same number of people are born on every day of the year and that there are 365 days in a year, the probability of finding someone sharing your birthday is 1/365.

Therefore, the probability that you have at least two people with the same birthday is:

The following graph shows the probability of finding a matching pair of birthdays in a group of size N, plotted against N. 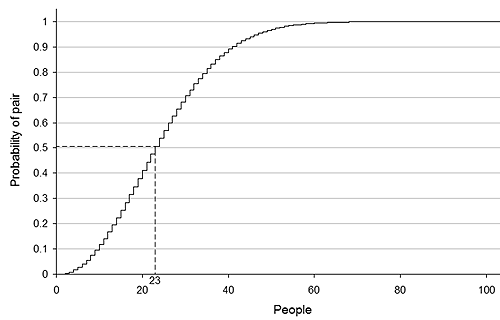 The probability of finding a matching pair of birthdays for number of people. Image from Wikipedia.

As shown in the figure, you need 23 people to have a 50:50 chance of two of them sharing a birthday. If you have 100 people, you can be 99.99997% sure that two of them will share a birthday. This result is known as the birthday paradox or birthday problem. It's called a "paradox" because intuitively you might guess that you'd need far more people, for example 365, to have a 50:50 chance that two share the same birthday.

Return to the activity