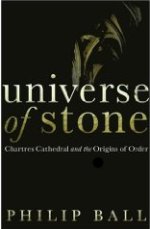 Universe of stone: Chartres cathedral and the triumph of the medieval mind

If you are interested in how medieval cathedrals came into being, and the mathematics associated with their architecture and construction, then this book is for you! Philip Ball takes us through the development of the Gothic style from the earlier Romanesque style in northwest Europe, and in Chartres in particular. He looks at the theological requirements of those who commissioned the great cathedrals, and how this impacted on architecture, construction and decoration. And he addresses questions about the nature of a cathedral, and what considerations were important for those commissioning such a vast project and for those carrying it out.

Earlier chapters are less mathematical on the whole than later ones, so if mathematics is your prime concern, you may want to dip into later chapters only. Ball is dismissive of much numerological speculation, pointing out that many of the significant ratios some claim to see in a building like Chartres cathedral are either insufficiently precise or arise through practical considerations. For instance, finding that sides of a right-angled triangle appear to be close to the ratio √5 : 1 does not mean that this is an example of the golden ratio being deliberately used, but is simply a consequence of √5 being the hypotenuse of a triangle with sides in the ratio 1 : 2. Personally, I found the analysis of why certain arch shapes were used at different times interesting, together with the discussion of how the arches would have been constructed.

Anyone who is interested in medieval architecture and construction, the medieval church, or the history of how mathematical techniques impacted on important medieval industries, will find much fascinating material here. However, this is probably not a book for those with only a passing interest in the topics covered, as it is a scholarly work, with a huge wealth of detail.

Jenny Gage coordinates the Motivate Project (which, like Plus, is part of the Millennium Mathematics Project). Before coming to the MMP in 2001, she taught maths in secondary schools in England and at the Open University. The Motivate Project provides inspiring videoconferences for schools for ages 5 to 18. Jenny's role is to plan and facilitate the programme, and to provide content and online resources.