The magic of shuffling

"If you do eight perfect shuffles in a row [of a standard 52 card pack], the out-shuffles where you keep the top and bottom cards the same, then the deck goes back to the original order after eight repetitions of those out-shuffles. Admittedly it would take quite a long time, but if you wanted somebody to think that the deck was well mixed at the beginning of a trick, you could give it eight of these shuffles. [Everyone else] would then be 100% certain that the cards were well mixed, as they'd seen you mix them quite a lot, but in fact you would have your order ready to go." (You can see a mathematical proof of why this works, at the end of this article.) 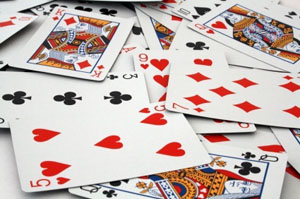 We may have started out learning how to shuffle perfection, but actually it's imperfection that we really want whether we are playing cards at home against a friend, or betting against the house at a casino. As you'll see below, as well as magic there is a great deal of maths hidden within a card shuffle – something you can find out more about in the next article, The mathematics of shuffling.

Show me the maths! Why eight out-shuffles is the same as none...

We were intrigued when Houstoun told us that doing eight out-shuffles of a standard 52 card pack returned you to the order of your original pack! There are various ways you can mathematically prove this, but the way we found most straightforward was explained by mathematician and magician Tori Noquez.

What we are interested in here is the order of the cards in the original pack, so we're going to forget about the value and suit of the card, and instead label all the cards with their original position in the pack. And, because it makes the maths easier, we're going to start by labelling the top card with a 0, the second card with a 1, and so on. So assuming we have a standard 52 card pack (the maths works for any even-number-sized pack) we'll label the cards:

where 0 was the top card of the original pack, and 51 the bottom card.

The cards in the first pile, the top half of the pack labelled

The cards in the second pile, the bottom half of the pack labelled

in the new pack. The card labelled 26 is moved to position 1 (

)in the shuffled pack. All the way to the card labelled 50 which is moved to position 49 (

) in the shuffled pack.

is moved to the position

in the shuffled pack.

So for a card labelled

and so on. In general,

. To return to the original order of the pack, we are looking for the number

of out-shuffles that returns the card labelled

to its original position, that is:

So we are looking for the number

The first eight powers of two are:

Therefore eight out-shuffles gives us back the original pack order, and this is the smallest number of out-shuffles that can do that.

The same mathematics works for any size pack,

is assumed to be even so you can split the pack exactly in half). To return the original pack order, you are looking for a number

of out-shuffles will return your pack of size

to the original pack order.

You can find our more in the next article, The mathematics of shuffling 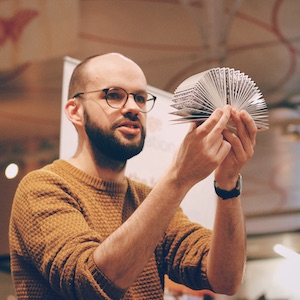 Will Houstoun is an international award-winning magician and instructor, with a PhD in the history of magic education. He specialises in consultancy for media and advertising as well as instruction on both the technical and historic aspects of magic. Will is the Magician in Residence at the Imperial College London/Royal College of Music Centre for Performance Science.