We really enjoyed this year's Black Heroes of Mathematics (BHoM) conference! This inspiring conference featured speakers from Africa, the US, the Caribbean and the UK. You can read our full coverage of the conference in our news story, but here are some of the highlights.

Do the maths thing

One of the talks, pre-recorded due to Susan Okereke's day job as a maths teacher, was a startling review of the state of numeracy in the UK. "Numeracy – having the confidence and competence to use numbers and think mathematically in everyday life – is a life skill,” she said. This skill has as big an impact on people's lives as reading and writing, but rather than matching the improvements in literacy, numeracy levels are falling year on year. 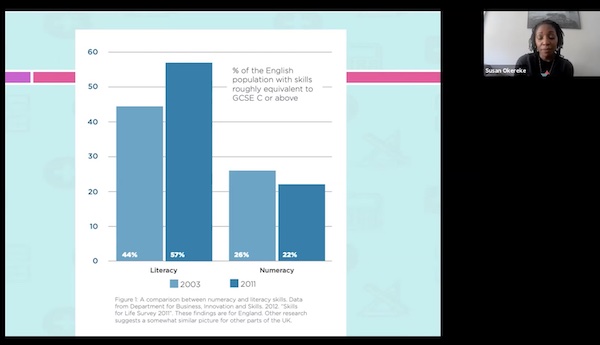 Susan Okereke, during her talk, showing the falling levels of numeracy.

In order to maximise their life chances and make a positive contribution, everybody, everybody has to do maths, says Okereke. "And I have seen with my own eyes that everyone can do maths." Speaking with the authority of someone who works in, and researches, maths education, she explained that improving teaching was only part of the process of improving numeracy. "We need good and relevant content and we need a good learning environment." But perhaps the most important piece of the puzzle is that we need good learners.

Creating good learners is down to all of us. Children need to grow up without hearing "I can't do maths" from their parents, family and friends. Advertisers, writers and film makers need to stop using the lazy stereotype of maths being boring, hard or at worst, a form of punishment. We need, as a society, to celebrate maths and value numeracy as highly as we value literacy.

As well as talks focussing on maths education, there were a mixture of technical talks and testimonial talks. Anotida Madzvamuse, Professor of Mathematical and Computational Biology at the University of Sussex, UK, gave a fascinating technical talk on using mathematics to understand how cells migrate. He began by showing intriguing videos of cells migrating across a flat slide viewed under a microscope. Madzvamuse's work aims to use such experimental data from bioscience to motivate mathematical models to understand wound healing, tumour growth, the development of embryos and many other biological phenomena.

A key part of all these phenomena is how cells change their shape when they are migrating. To gather experimental data, colleagues of Madzvamuse used microscopes to capture static images as cells moved towards a wound in a transparent zebra fish. This whole cell tracking captures the surface area, volume and curvature of the migrating cells, information which is very important for analysing changes that are relevant to applications like wound healing and cancer growth. 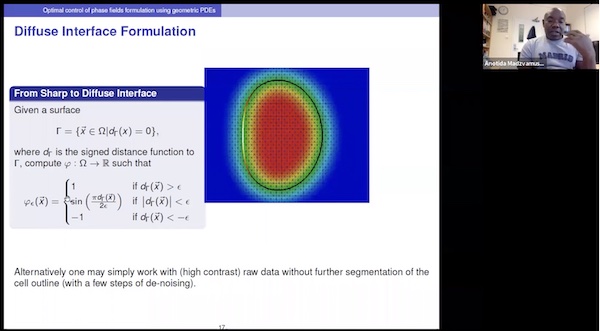 Madzvamuse, in his talk, explaining his approach to modelling the changing shape of cells during migration.

The work Madzvamuse presented relies on the mathematical evolution of the shape of cells, taking into account very little information about the biochemistry or the mechanics involved. He uses geometric evolution law models, under which the boundary of an object changes in response to its curvature according to some kind of mathematical rule.

The power of stories

We also particularly enjoyed the talk by Maurine Atieno Songa, a PhD student at the University of KwaZulu-Natal, South Africa. Songa explained the importance of role models in her life, and the broader importance of telling the stories of mathematical heroes. As she explained, it is the stories of identifiable heroes that can have the greatest impact, rather than the great shining stars of the wider mathematical world.

"An African child in a village needs people they can identify with. That they can look up to and say this is somebody I used to see every day and now they have made it." She said she lacked these identifiable heroes when she was young, being brought up by her maternal grandmother in the western part of Kenya, struggling with the death of her mother. "When you grow up in so much poverty it's not easy to dream beyond your surroundings."

Thanks to a highschool bursary she found someone to look up to, a fellow student a few years ahead of her who went on to university. She went on to study at AIMS (one of the organisations supporting the conference) and met more role models during her career, and now is studying for her PhD. Telling her own story, and the stories of others, is now an important part of the way Songa is supporting other girls to go on to university. And as part of telling her own story she gave us a fascinating and delightfully accessible introduction to her work in category theory. 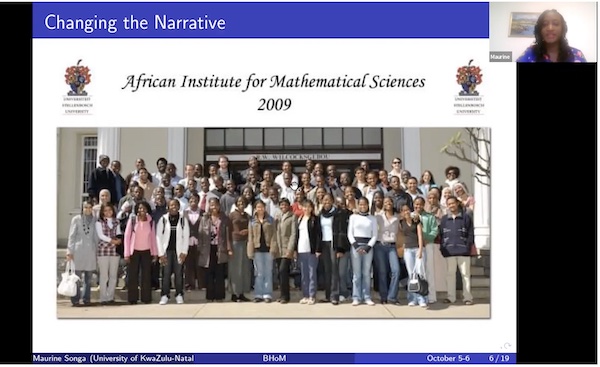 Songa with fellow graduates at AIMS, in a screen shot from her talk.

Stories helped inspire Songa to pursue mathematics. And people sharing her story further has provided her with many connections, including the one with the BHoM organisers that led her to speak to the conference.

"May the footprints we leave behind by telling these powerful stories of our STEM journeys be a wealth of inspiration to another," she said. Songa and all the other black heroes of mathematics left everyone in the audience, including us, inspired. They gave everyone important ideas to think about and act on to inspire the next generation of mathematicians.

Read more about this fantastic event in our news story. Return to the Plus advent calendar 2021.