Just after our last Issue (No. 2) was published the world's first national cosmology supercomputer — COSMOS — was officially launched on Monday, 19th May 1997. 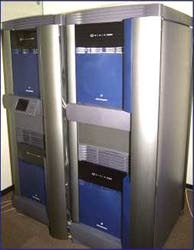 COSMOS is owned and used by the UK Computational Cosmology Consortium (UK-CCC) and represents a vital step in maintaining and enhancing the UK's high international standing in this very competitive field. The Consortium is interdisciplinary and brings together both particle cosmologists and astrophysicists.

Professor Stephen Hawking, principal investigator of the UK-CCC, said at the time of the launch: "The COSMOS computer will enable us to calculate what our theories of the early universe predict and test them against the new observational results that are now coming in." The consortium has already obtained ground-breaking results.

UK-CCC's mission is to push back the frontiers of our understanding to the earliest fractions of a second after the Hot Big Bang — to "crack the cosmic code". In particular, the UK-CCC will be studying competing models for the origin of galaxies and other large-scale structures and studying theories about the creation of matter in the universe.

COSMOS (valued at £2M) is the largest Silicon Graphics Origin2000 supercomputer in the UK with 32 high performance R10000 processors and 8,000 Mbytes RAM.

The COSMOS tour
Take a guided and illustrated tour describing the new national cosmology supercomputer and the exciting science which initiated this project.