Did chaos cause mayhem in Jurassic Park?

There is a scene in the movie Jurassic Park in which the character of Ian Malcolm (played by Jeff Goldblum) attempts to explain to Dr. Sattler (Laura Dern) the theory of chaos. Dropping a bead of water onto her knuckles, he asserts that "tiny variations, the orientation of hairs on your hand, the amount of blood distending your vessels ... vastly affect the outcome", ultimately preventing the droplet's trajectory from being foreseen. 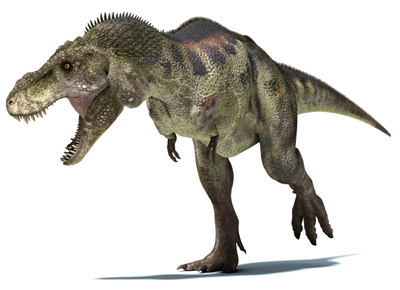 What happened in Jurassic Park?

Malcolm attributes this unpredictability to chaos, as he does repeatedly throughout the film whenever events evolve in unanticipated ways. With equally-grating parts flirtation and self-righteousness, he flaunts his mathematical discipline as an effective guarantee that the park will spin out of its caretakers' control. Of course, he is correct in his prediction of the park's downfall, but is chaos theory really the explanation? At the risk of spoiling Dr. Malcolm's practiced mystique, let us explore the mathematics of chaos and its role — if any — in the unfolding of Jurassic Park.

Chaos theory is a subfield of the more general study of dynamical systems, which are mathematical models of how quantities evolve over time. For example, one might set up a dynamical system for the number of predator animals (say, Tyrannasaurus rex) and prey animals (say, goats) on an island at the start of each passing month. This system would be described by a function

would show the populations at the start of March, which could then be fed back into

to give the populations at the start of April, and so on.

In general, depending on the specific scenario one wishes to describe, the function that represents its dynamics might have any number of variables. The steps of time might be months or milliseconds or millenia. Regardless, if

is the state of the system at one moment in time,

will always mean its state after one step of time has elapsed, and the dynamics of the system will be recorded by whether the sequence of states

To make matters simpler, let’s imagine that we have a system described by a function with just one variable,

can be any number between 0 and 1. What happens when you plug some value of

into the formula, then plug

into the formula again, and so on? When

for example, we have

In words: if the system starts at state 0.25, then it gets closer and closer to state 0.5 as time elapses.

In fact, the same occurs for almost any seed value of

on any starting number between 0 and 1 (not including the two extremes), and the results will be pulled toward the center of the interval as though by quicksand.

is an example of a dynamical system, but it is not an example of chaos. Let us make, however, a seemingly innocent modification, switching to the function

Suddenly, the dynamics get a lot more interesting. For some starting values called fxed points,

will simply get stuck:

It can also get locked in a loop wherein it bounces back and forth between two values forever. For example, using decimal approximations, the starting value

etcetera. A loop of length three is also possible, with

cycling through three different numbers inde finitely. In fact, there are starting values of

for which repeated application of

results in any length of loop. 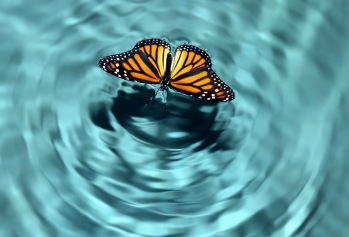 Sensitivity to initial conditions is popularly know as the butterfly effect.

In addition to all of these possibilities, still more can occur. For some starting

values, there is no repetition at all, nor do the results hone in toward any limit as they did in the case of the function

. Rather, the sequence of numbers appears to jump wildly around, never settling or stabilising.

What makes the dynamical system described by

most interesting, though — indeed, what makes it truly chaotic — is not just the existence of these myriad possibilities, but how difficult it is to distinguish between them. Two seed values of

that are within 0.000001 of one another can evolve in entirely different trajectories after just a few iterations of

. See for yourself what happens when the seed value

is used instead of

; you should find that the calmly repeating pattern is quickly replaced by something unrecognisable.

, called sensitivity to initial conditions, is one of the defining features of chaos, and it is what Dr. Malcolm was attempting to illustrate with his droplet of water on the hand of Dr. Sattler in Jurassic Park. The consequences of such sensitivity for real-world scenarios are striking. Suppose that we want to predict the future state of a system — the weather, for example — that is sensitive to initial conditions. We could measure its current state, and then iterate the system’s governing function on that seed value. This would yield an answer, but if our measurement of the system’s current state had been slightly imprecise, then the true result after a few iterations might be wildly different. Since empirical measurement with one hundred percent precision is not possible, this makes the predictive power of the model more than a few time-steps into the future essentially worthless.

The popular buzz-word for this phenonemon is the butterfly effect, a phrase inspired by a 1972 paper by the chaos theory pioneer Edward Lorenz. The astounding thing is that the unpredictability arises from a deterministic system: the function that describes the system tells you exactly what its next value will be. Nothing is left to randomness or chance, and yet accurate prediction is still impossible. To describe this strange state of affairs, Lorenz reportedly used the slogan

Chaotic dynamics have been observed in a wide range of phenomena, from the motion of fluids to insect populations and even the paths of planets in our solar system.

Can we always blame chaos?

One thing that Jurassic Park got right in its loose portrayal of chaos was the suggestion that it can arise out a gradual disintegration of order. The two functions

, for example, are members of the family

is an unspecified constant. If one imagines a dial on which the value of

can be adjusted, then slowly increasing the dial’s setting from

upward makes the dynamics of

become gradually more complicated, yet never chaotic. Then, at a particular value of

Still, Dr. Malcolm is a bit too assured in his diagnosis of chaos as the reason for Jurassic Park's tragic falling apart. While chaos limits one's forecasting ability, there are other possible explanations for unpredictability in nature.

One issue is that many real-world systems are extraordinarily complicated. It's probably not true that the populations of Tyrannasaurus rex and goats on an island one month really determine their values the next month, but instead, a host of other environmental factors also come into play: the presence of other animals, for example, or diseases, or the availability of food for the prey animals to eat.This doesn't mean that the predator-prey relationship cannot be modelled by a mathematical dynamical system, but it does mean that the system may require many, many variables. Once this can of worms is opened, how can one ever truly know whether sufficiently many factors are being taken into account? And can all of the factors be simultaneously measured with any reliability? These issues that arise out of very complex systems can lead to empirical unpredictability even when no chaos is present.

Another potential cause of unpredictability is sheer randomness. In public discourse, chaos and randomness are often conflated, but in mathematical terms the two are very different. As Lorenz's maxim summarises, a chaotic system is deterministic, so its future state is in principle determined by current conditions. When randomness is involved, no such determinism holds. 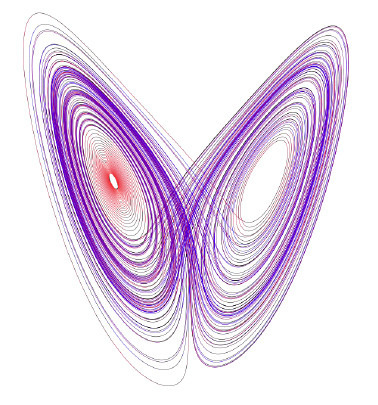 The Lorenz attractor is a strange attractor for a three-variable chaotic system.

Though not directly related to the theme of unpredictability, there is another feature of chaotic systems worth mentioning that distinguishes them from random ones. In the presence of either chaos or randomness, certain seed values evolve in trajectories that neither repeat nor stabilise. Yet in a chaotic system, this apparently erratic motion can outline an exquisitely structured shape even as it leaps around; the mathematical term for this type of shape, a strange attractor, even makes a brief cameo in Jurassic Park. The image on the right is an example of a strange attractor that arises from a dynamical system that takes three variables as input and returns three outputs (as opposed to the one-variable examples considered above), so the evolution of a certain seed value is illustrated as a path in three-dimensional space. The beautiful shape shown here emerges only gradually over the course of a chaotic, wildly-jumping trajectory. Such delicate patterning amidst apparent disorder is one of chaos theory's profound surprises.

Back to the park

So was it chaos that destroyed Jurassic Park, as Dr. Malcolm predicted? Maybe, maybe not. Situations in the film often develop in unanticipated ways, but we are given no particular reason to attribute this unpredictability to chaos as opposed to complexity or randomness. In some ways, this diminishes the credibility of Dr. Malcolm as a character. Yet on another level, it plays directly into the point he so persistently advocates. Full understanding of a dynamical system as it arises in nature is a very difficult thing to come by, and the qualities of such a system — its order or randomness, chaos or complexity — rarely present themselves in a straightforward way. One must always be careful not to mistake a degree of understanding, even of simplicity, for any guarantee of enduring predictability. Confidence in the future of most dynamic situations, as John Hammond so disastrously displays for his creation in Jurassic Park, is a sign not of comprehension but of hubris. 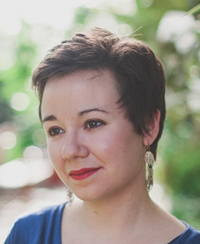 Emily Clader received her PhD in Mathematics from the University of Michigan in May 2014, where her research focused on questions in geometry related to the theoretical physics of string theory. She is currently a Junior Fellow at the Institute for Mathematical Research of the ETH Zürich.

The Wikipedia entry for Chaos Theory has the quote:

I do not know which is correct, not having the source at hand, but it seems to me that second version better expresses the implications.

Nice walk through the park

Nice walk through the big concepts in chaos... and distinctions of not chaos.

the credibility of Dr. Malcolm as a character

What really diminishes the credibility of Dr. Malcolm as a character is the fact that he is effectively saying that we might as well not try to do X, because X is hopeless, based on Chaos Theory. Following Dr. Malcolm's advice, we may as well shut down all the Zoos in the world, because after all, "Nature will find a way!

Turning to a real life case, I wonder about the relevancy of chaos to the Ebola outbreak and the CDC's confidence in USA healthcare system. Your last line is a beautiful assessment of what is wrong with their view. So many factors could influence what happens and they don't realize it could be overwhelmed just by sheer numbers of patients. And they dismiss it as not possible because of their confidence in the future. Recent events should show just how unprepared they are.

Read the book for gods sake. Chaos Theory is a super minor subject in the movie, which completely disregards the background and studies of our good friend Dr. Malcolm. You'll find that in the books, chaos theory is a much more touched on subject.

I'm 3/4 of the way through the book right now, and I can tell you that Chaos Theory is discussed in a lot more detail while Speilberg took most of it out in the movie's adaptation of Crichton's telling.

The book's telling of chaos theory and fractals is a lot better than the movie, and I recommend checking it out!