Mathematically speaking, things in David Damanik's world don't line up — and he can prove it. 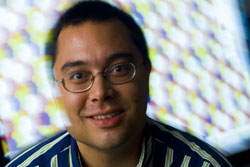 David Damanik, associate professor of mathematics at Rice University, has published a key proof in the study of quasicrystals. Photo credit: Jeff Fitlow.

In new research due to appear in July's issue of the Journal of the American Mathematical Society, Damanik and his colleague Serguei Tcheremchantsev offer a key proof in the study of quasicrystals, crystal-like materials whose atoms don't line up in neat, unbroken rows like the atoms found in crystals. Damanik's latest work focuses on a popular model mathematicians use to study quasicrystals. The research, which was 10 years in the making, proves that the quasicrystals in the model are not electrical conductors and sheds light on a little-understood corner of materials science. "This is the first time this has been done, and given the broad academic interest in quasicrystals we expect the paper to generate significant interest," Damanik says.

Until 1982 quasicrystals weren't just undiscovered, they were believed to be physically impossible. In literature dating to the early 19th century, mineralogists defined crystals to be solid objects that are ordered at the microscopic level. An example of such an ordered object is the three-dimensional analogue of a bathroom tiling: it consists of identical copies of a basic structural unit — a cube in this case — that are placed alongside each other so that the cube repeats itself infinitely many times in all three spatial directions. Until 1982 people believed that all crystals exhibited exactly this kind of periodic structure: they consisted of one basic unit — a collection of atoms arranged in a certain way — repeated again and again.

In the early 20th century, scientists' beliefs were confirmed when crystals were bombarded with X-rays. The crystals diffracted light into patterns of spots and, in line with theoretical predictions, the patterns possessed rotational symmetry: they looked exactly the same when they were rotated through certain angles, much like a bathroom tiling looks the same when you rotate it through 90° (or any of its multiples) around the corner of one of the tiles.

The assumed periodicity of the crystals also meant that the only rotational symmetries that could possibly occur in the diffraction patterns were two-fold, three-fold, four-fold, or six-fold. In other words, the angles of those rotations that leave the patterns invariant must be either 180°, 120°, 90° or 60° (or any of their multiples). Again, these predictions were confirmed by observations.

All was well until 1982, when physicist Dan Shechtman did an X-ray diffraction study on a new alloy he'd made at what is now the National Institute of Standards and Technology. The pattern of spots looked very similar to those made by crystals, but it had five-fold rotational symmetry like a pentagon — something that was clearly forbidden for a periodic structure like a crystal. The alloy — dubbed quasicrystal, short for quasiperiodic crystal — showed that some degree of microscopic order is possible even in the absence of strict periodicity. 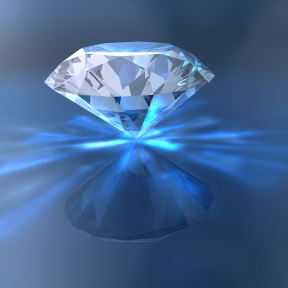 A girl's best friend: more orderly than a quasicrystal.

Dozens of quasicrystals have been made since Shechtman's discovery and scientists have been struggling to understand their physical properties. Their increased complexity means that established methods don't always work. "Mathematically speaking, quasicrystals fall into a middle ground between order and disorder," says Damanik. "Over the past decade, it's become increasingly clear that the mathematical tools that people have used for decades to predict the electronic properties of materials will not work in this middle ground."

Damanik and Tcheremchantsev's work answers questions concerning the electric conductivity of quasicrystals. The movement of electrons through any material is described by Schrödinger's equation, named after the physicist Erwin Schrödinger. For decades, mathematicians have been able to use a simplified version of the equation to find out whether a material will be a conductor or an insulator. In the past five years, however, mathematicians have proved that this method won't work for quasicrystals. Although computer simulations indicated that electrons' movement through quasicrystals is very different from their movement through a conductor, there was no rigorous mathematical proof that this is always the case, and scientists were left unsatisfied. "Computers never show you the whole picture," Damanik says, "They only approximate a solution for a finite time."

Damanik and Tcheremchantsev thus employed a mathematical model of quasicrystals to see if the electron behaviour predicted by computers was a necessary consequence of the underlying mathematics. They were successful: "Computer simulations have shown that electrons move through quasicrystals — albeit very slowly — in a way that's markedly different from the way they move through a conductor. In our paper we proved that electrons always behave in this way in the quasicrystal model we studied. Not just now or tomorrow but for all time."