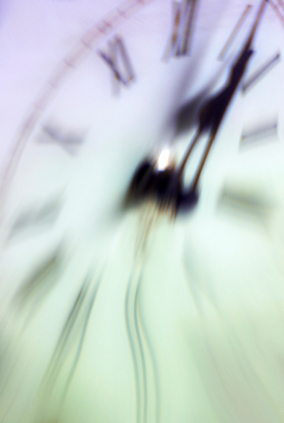 Time dilation shown to a higher precision than ever.

One of Einstein's most famous theories — that a moving clock ticks more slowly than a stationary one — has been verified by particle acceleration experiments ten times more precisely than ever before.

Einstein's theory of special relativity suggests that time speeds up or slows down according to how fast an object is moving in relation to another object (you can find out more in the Plus article What's so special about special relativity). A clock that is in motion ticks more slowly than an identical clock at rest. This is called time dilation. We do not see this phenomenon in everyday life, as you need to be travelling very fast for the effect to be observable.

Previously, atomic clocks on aeroplanes and satellites have measured this effect to within 1% of Einstein's predictions. However, new research conducted on a particle accelerator by a research team led by Gerald Gwinner of the University of Manitoba in Winnipeg, Canada has greatly improved on these results.

The international team used a particle accelerator at the Max Planck Institute for Nuclear Physics in Heidelberg, Germany, to hurtle lithium-7 ions around a massive ring at a fraction of the speed of light. When at rest with respect to an observer, lithium-7 ions have an electronic transition between atomic energy levels at 546 THz — if you shine laser light into the ions at this frequency, these photons are absorbed and you force the ions into a higher energy level. You can measure when such electronic transitions occur by laser induced fluorescence spectroscopy. When the ions are excited into the higher energy level, they fluoresce (re-emit light) and fall back into their lower energy states. This fluorescence can be detected by photomultipliers.

Now imagine fast-moving ions with a laser shining from behind them. Since the ions are moving away from the light source, they will record the frequency of the laser light as slower than a stationary observer: this is due to the relativistic Doppler effect (see the Plus article Doppler detectives to find out more).

The relativistic Doppler effect combines the classical Doppler effect (for instance the high to low movement in sound pitch as a car zooms past you), with the concept of time dilation. As frequency is dependent on time (literally, it is the number of wavelengths that pass a point in one second), the classical Doppler equations are modified within Einstein's theory of special relativity to take this into account. Special relativity predicts exactly how the frequency

as observed by the ions depends on the frequency

, as recorded by a stationary observer:

is the velocity of the ions and

These considerations suggest a simple (at least in theory) test for time dilation: accelerate the ions to a substantial fraction of the speed of light, shine a laser from behind and note the frequency of light at which the ions change their energy level by observing their fluorescence. The ions only change energy level when the frequency — from their perspective — is 546 THz. Detection of the fluorescence and at what frequency it occurs from the laboratory frame of reference will therefore tell you the difference between the frequency as observed by a stationary observer in the laboratory and as observed by the ions. These values can then be used to test the above equation.

In practice, things are slightly more difficult. Apart from the fact that experimental laser chemistry is very difficult to set up, there are physical limitations to overcome. The ions do not all move at exactly the same velocity — there is a small spread of velocities about a mean point. The electronic transition is therefore Doppler shifted for each ion in the sample by a different amount. If we probe the ions with one laser, we find that the peak in the fluorescence spectrum that we expected at only one frequency is spread over a small range — the peak has been Doppler Broadened.

This can be overcome by the use of a second laser aimed into the beam of ions from the other side using a technique known as laser saturation spectroscopy. The first laser has a fixed frequency and so only excites one velocity of ions. This laser has high intensity and saturates the transition — all ions at this velocity are forced into their excited state. The second laser has lower intensity and is used to probe the sample. As it scans through frequencies, it excites the ions depending on their velocities and how much the light has been Doppler shifted. When it reaches the frequency that should excite the ions of the velocity of interest, we find that the fluorescence stops as the first laser has already excited them — no fluorescence due to the second laser is detected. In this way, the combination of two lasers has picked out a single velocity of ions.

As before, special relativity predicts that the frequency

has changed because the ions are now moving towards rather than away from the laser.

If both lasers cause an ion to change energy levels, we have

And this is exactly the relationship the scientists tested.

The experiment was conducted for various ion velocities and in each case the two laser frequencies did indeed multiply to the square of 546. What's more, the test was found to be ten times more accurate than previous experiments, giving special relativity another great boost.